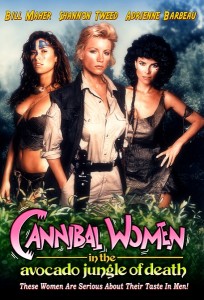 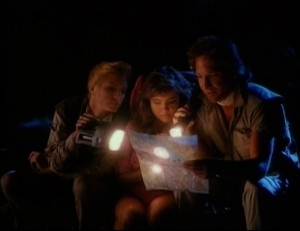 Tweed decides that she needs to hire a mercenary guide to help protect her and Bunny, a bubbly student that has recently become enamored with women’s studies. After scaring off a black Rambo, a ninja and a ripped professional wrestler, Tweed hires Bill Maher doing his best chauvinistic Indiana Jones routine. So off they go into the uncharted wilderness of the San Bernadino foothills!

Cannibal Women in the Avocado Jungle of Death is a comedy, and while it didn’t really make me laugh out loud, I did find it very amusing. It’s a bit stuck in its time as any topical satire would be, and as I was only eight when this came out, I’m not completely well versed in the political climate of the day. I know enough to get most of the jokes, but even still it’s remains amusing and not howl-inducing. I did laugh out loud once, though, during the “Palm Springs hippo” attack. The name really got me, but I also enjoyed that the entire attack consisted of everyone on the boat screaming, some gunshots and a bunch of wild hippo sound effects. It never cuts away, not even to hippo stock footage, and I found this to be quite funny. 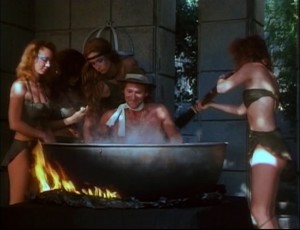 Now before everyone simply writes this movie off as another shitty B-Movie in this Full Moon series of mine, we must take a quick peek at the filmography of the writer/director J.F. Lawton. Cannibal Women in the Avocado Jungle of Death was his début film, which he followed with another comedy starring his friend Bill Maher, Pizza Man. After that he sold his first major script, which was filmed as Pretty Woman, and then later he went on to give the world the best Steven Seagal movie, Under Siege, and its mediocre sequel. This is yet another instance of B-Movies giving a leg up to a budding talent, and even though Lawton’s filmography is nothing truly great from an artistic standpoint, no action fan can argue against Under Siege being fucking awesome. So before you take shots at this film, think about a world without Under Siege. Think about it… OK, don’t think about it too much, it’s a dire enough world as it is without imagining our cinematic greats never being made.

As this is a satire, the jokes are mostly referential as I mentioned above, and one of these moments was especially inspired. Bill Maher and his caravan have met up with an emasculated tribe of men called the Donahues (after ’80s talk show host Phil Donahue) who spend all day knitting potholders and cooking wonderful meals. As Bill Maher is playing a virile man’s man who loves to pick up hot women and give them rides in his Vette, he can’t stand to see men live like this. So he busts open a case of Milwaukee’s Best and holds one out to their leader. The man looks up at the shiny aluminum can from his low place of groveling on the dirt floor. He slowly reaches out to touch its shiny surface and an almost familiar song begins to play. If this were a big-budget movie, you might hear Strauss’ Also sprach Zarathustra, but this is a Full Moon financed movie, so the composer Carl Dante instead came up with a similar track that he titled 2000 1/2. It’s brilliant, and it’s this kind of spirit that makes me love the inventiveness of B-Movies.

Cannibal Women in the Avocado Jungle of Death isn’t anything spectacular, but it is amusing and quite entertaining overall if you’re into pure camp B-Movies. I’m a Bill Maher fan as well, so I had that going for me. In addition to skewering Apocalypse Now and Indiana Jones, there’s a number of ’80s pop culture references that I’m sure anyone who remembers the ’80s will get a kick out of. And as this is also a cannibal movie, of course there’s the requisite “cannibals are making soup out of one of the characters while he thinks they’re just treating him to a wonderful hot bath” scene. As many times as I see one of those scenes, for some reason I never tire of them.

Next week on Full Moon Tuesday: Jeffrey Combs in Doctor Mordrid, the closest the world has ever come to an actual Doctor Strange movie!