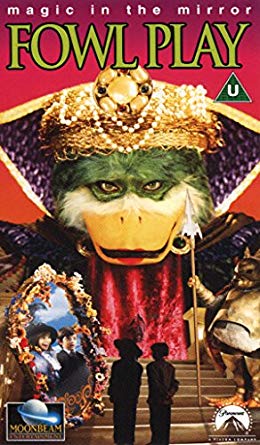 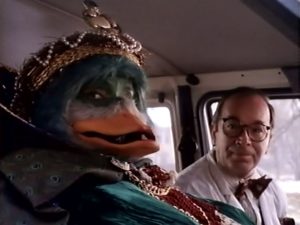 In general, I prefer a film that takes a normal human and has them go on an adventure in a new world. The first Magic in the Mirror crafted an effective, low-budget version of this very well, and so the logical next step is to reverse the formula and have the wild fantasy creatures visit our world. This is inherently less interesting to me, and in the case of this sequel there isn’t a lot of effort (or money) going into making it anything special. It does bring the Magic in the Mirror films one step closer to a kind of B-Movie Dark Tower, but no matter how much I love Stephen King’s magnum opus this doesn’t help. I do feel like kids who liked the first film would be far less critical of the film’s perceived lack of excitement, though, as there’s an inherent horror in having monsters from another world invading your home — giant duck monsters who want to boil you into tea, no less. Even I was a little scared when I put myself into the situation, so I imagine it would be even more effective in the open mind of a child.

Magic in the Mirror: Fowl Play was shot back-to-back (or simultaneously) with the first film, so it reuses all the same sets and locations, further cementing my boredom. That fact that we’ve seen all the fantastic visuals before, and that the majority of the film is stuck inside Mary Margaret’s mundane home really puts a hamper on how much enjoyment you can get out of the film. The only time I was truly taken aback and impressed was the decision to have the Drakes and the evil scientist travel via the time-honored method of transportation favored by everyone from legitimate businesses to serial killers: the white panel van! Seeing Dragora riding shotgun was enough to make the whole experience worth it for me, but I am easily amused these days.