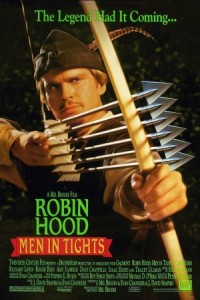 I wanted to like this movie, I really did. I decided to watch it because I have no interest in the new Ridley Scott/Russell Crowe version, but I thought it might be fun to get on the Robin Hood train anyway. At a base level I did like it, but that just isn’t enough these days. I didn’t expect this to be anything great, but my past experience with Mel Brooks left open the door of hope and I took the plunge.

If you’ve seen any other filmed version of Robin Hood you know the basic story here. Specifically, if you’ve seen Robin Hood: Prince of Thieves you know pretty much the exact story. I happen to have seen that film dozens of times while I was growing up so I know it well. I recently re-watched it about a year ago, so it’s still fresh in my mind. That film didn’t hold up very well, and neither does the parody version. There’s definitely some great jokes here, but for every one of those, there’s five okay jokes to go with it. You’re left with a film that starts out pretty good, but never rises above the source material.

Cary Elwes was surprisingly good as Robin Hood. It was clear that his inspiration for the portrayal came directly from Errol Flynn, with good reason. No one before or since has come close to his version, but Elwes actually manages to hold his own and remain funny. Richard Lewis is good as Prince John, but he does get annoying. I could really see that role being played by Gene Wilder had the film been made a few years earlier. Dave Chappelle is wasted as one of the merry men, but more so now because I know how funny he can be. If I had seen it without any clue who he was I probably would have enjoyed his contributions more.

Maid Marian’s introduction song is one of the high points of the film and Mel Brooks actually managed to fake me out on where he was going with a joke. The camera cranes in on a castle window as Marian sings. The camera moves closer and closer to the window and right before it crashes into it, it cuts to Marian singing in bed. “Wow, I thought it was going to crash through the window,” I said to myself. A few seconds later, after I had just about forgot about it, the camera crashes through the window. Good stuff, and I wish more of the film had that kind of cleverness.

It’s not a bad movie, but it’s far from good. The movie does have its fans though, so don’t let me discourage you if you enjoy Brooks’s later period movies. I don’t regret watching it, I just wish it was better. Ultimately this movie just suffered from being seen too late in my life. If I had dropped it on my brain when it was first released, I would have been twelve and the film would have been a lot more successful. Oh well.