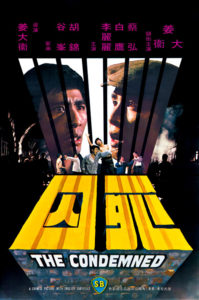 The counterpoint to Feng’s righteous martial artist is Yang Lin (David Chiang), a pickpocket and generally mischievous guy. He doesn’t know martial arts and he’s not really interested in them or the values they teach. He’s not all bad, though; he’s has a good heart, and generally shares his spoils with the poor and unfortunate people around him. He has such a reputation among the criminals that when he arrives in the town jail, he is greeted with nothing but cheers and smiles. This doesn’t smack of punishment, so in order to make sure Yang Lin doesn’t have a good time the police chief throws him in the solitary confinement cell with Feng Dagang.

In terms of action, the film makes you wait. In some films this is a bad thing, but in The Condemned it is natural and well-handled for the most part. The leads are stuck in jail for a good amount of time, so you can’t logically expect them to do a lot of fighting, now can you? 🙂 Anyway, as the film builds towards its conclusion, the action heats up and delivers fight after fight after fight. David Chiang fights as the scrappy, untrained Yang Lin, doing his best to contribute but not having too much of an effect. This leaves Tsai Hung to mop the floor with everyone else, which is a pretty stacked cast of Shaw heavies: Wong Ching, Chan Shen, Pai Ying and Ku Feng filling out the film’s major villain roles. Of course, Tsai performs superbly and the choreography by Tang Chia and Huang Pei-Chih is excellent. Surprisingly, a lot of my favorite choreography bits came by way of Yang Lin, as his lack of ability led to some interesting attempts and successes within the fights.

The action is excellent when it comes, but its the characters of The Condemned where the film really shines. The two leads are built up slowly and deliberately, and they both found a place in my heart. I don’t know if the film will be as successful with someone who just wants to see David Chiang and Tsai Hung kick ass, but there’s plenty of other films that will deliver that. The Condemned is a great film from David Chiang the director, and I look forward to seeing more of his work.

Next up in this chronological journey through the Shaw Brothers Martial Arts catalog is a movie with a questionable amount of martial content: Wong Fung’s Emperor Chien Lung! See ya then!