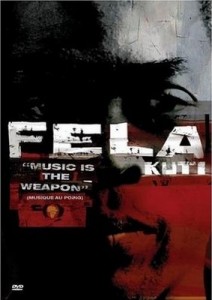 Fela Kuti is one of my favorite musical artists. He created the Afrobeat genre and sound together with his band the Africa ’70 (and later the Egypt ’80). He seems to have entered more of the mainstream consciousness with the recent success of the Broadway musical Fela!, but the real heart of his music lies in Nigeria and the political struggles he faced there.

This film features a couple of live performances from Fela and the band, none of them full songs, but enough to allow you to get a sense of his personal style on-stage. The film also covers a history of Fela and his music, covering his trip to America where he met Black Panthers who inspired him to become more political in his own country. The problem is, if you know much of anything about Fela and his music, this documentary doesn’t offer much that you haven’t already heard. It’s not that big of a problem though, as any Fela fan will enjoy the live performances and the extensive interviews with Fela himself.

The film does do a good job of showing the poor living conditions in the Nigeria’s largest city, Lagos. These scenes are cut to Fela’s song Sorrow, Tears, and Blood and it is a perfect choice. The images of people’s everyday struggles echo the lyrics to the song and like never before I was really able to grasp the power of his words. His music is so much fun, but underlying that is the immense Nigerian social problems. Seeing it all at once brought it home and shows how Fela was so much more than just a bandleader. He sought above all to improve the lives of the Nigerian people through his music.

Music is the weapon.

I’ll leave you with some of the lyrics to the song I mentioned above, Sorrow, Tears, and Blood. Seek it out if you’ve never heard it (YouTube video below!). 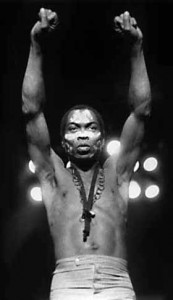