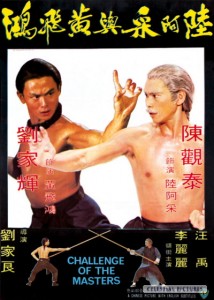 The central focus of the film is Wong Fei-Hung’s growth, though, and in order to achieve this character evolution Fei-Hung must learn martial arts. The way the sub-plots tie into Wong’s story provide him ample reason to embark on a genre-standard story of revenge, but Lau has something different in mind. His lifelong goal was to bring true martial arts to the screen, and anyone who has studied martial arts even a small amount knows that it’s not about fighting and revenge. The physical element is a large component, but the philosophy of the arts, and the connection between these two facets, are what makes the martial arts what it is. With Wong’s arc in Challenge of the Masters, Lau communicates this expertly, while still providing incredible fight sequences and loads of entertainment.

The lineage of Lau’s Hung Gar kung fu can be traced back to Wong Fei-Hung and the other characters in Challenge of the Masters, and this must have figured into his passion for bringing his kung fu to a wider audience. The weight of this passage of knowledge to the next generation is even specifically addressed in the film, when Yuan mentions that Wong Fei-Hung looks to be the future of Hung Gar. With this lineage on Lau’s shoulders, it’s no surprise that he should wish to tell this sort of story with these specific characters. Fei-Hung had been traditionally depicted as a wise, stalwart pillar of the community (similar to how Wong Kei-Ying is portrayed in the film), but Lau and screenwriter Ni Kuang have chosen to tell the tale of how the martial arts gave his character the discipline necessary to become that iconic folk hero we all know and love. It’s as much an homage to Lau’s lineage as it is a message of how hard work and dedication can transform someone into a fully realized and superior version of themselves.

Lau’s direction is improved from his first film, The Spiritual Boxer, to the point of crafting a classic film worthy of praise and repeated viewings over 40 years after its initial release. His ability to blend the philosophy with the physicality of the martial arts is a big reason the film remains successful. What is likely to wow audiences the most is Lau’s stunning choreography, though. His work on Chang Cheh’s films in previous years always set the high mark for the genre to strive for, and here in Challenge of the Masters he once again raises the standard. The Shaw Brothers produced a ton of fantastic martial arts films, but very few of the films before it rise to the heights shown in Challenge of the Masters. Lau’s turn as a villainous secondary character, his fight with his brother Lau Kar-Wing, and the introduction of Gordon Liu in his first starring role all work together to create a film with a wealth of stunning martial arts performances. This isn’t a film filled with fights, but the quality of the action is of the highest order.

Challenge of the Masters was one of the few Shaw Brothers movies I saw when I first got into Hong Kong film during the ’90s, and it remains one of my favorite Shaw films. The mix of philosophy, dope choreography and a cast stacked with tons of my favorite Shaw stars make it an absolute must see for any martial arts film fan. The Spiritual Boxer saw the debut of Lau as a director, and it introduced us to his basic approach to filmmaking and the martial arts, but Challenge of the Masters is the first real representation of the style and philosophy that underpins the majority of Lau Kar-Leung’s work.

Before I end this, I’d also like to note that Lau’s first two films must have been highly influential on Drunken Master. Jackie Chan and Yuen Woo-Ping evolved the blending of comedy and martial arts in The Spiritual Boxer into a style all its own, while mixing it up with the basic premise of an untrained, undisciplined Wong Fei-Hung from Challenge of the Masters. Lau Kar-Leung is truly one of the most influential filmmakers in the genre, and as I continue discovering and re-discovering Hong Kong cinema, his legacy only grows exponentially.

Next up in this chronological journey through the Shaw Brothers Martial Arts is the David Chiang-directed martial drama, The Condemned! See ya then!