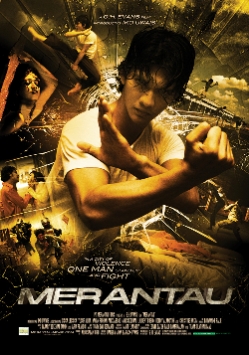 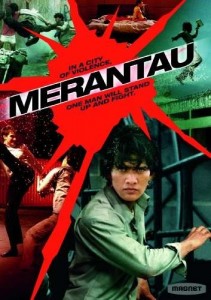 The plot of Merantau can easily be written off as an afterthought, or perhaps underdeveloped, but it would be too shallow to simply hurl insults at it. Sure, there isn’t a lot of dialogue, but there is a strong through-line of emotion, drama and narrative running through every scene. The fact that everything comes through perfectly without the use of words is a testament to the direction of Gareth Evans, who skillfully tells his story with clever camera work and expert editing. And besides, the story is about a somewhat timid young guy in search of his manhood amidst a sea of villains who punch first and ask questions later when you’re in a heap upon the ground… how much dialogue does there need to be? About this much is the correct answer, and again, I was surprised at just how involved I was with every character by the end of the film. 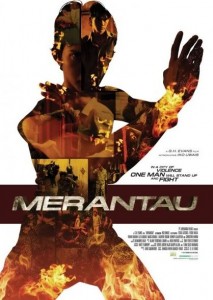 But yeah, you’ve seen this story told before, and you’ve probably seen it told better. But don’t let that stop you from watching Merantau, because when you’re sportin’ a giant shit-eating grin through some of the most fun and impressive cinematic fights of the last few years, you just can’t argue about the worth of the film through its narrative. No shit, Uwais and Team Silat have crafted some incredible fights for martial arts fans to hoot, holler and cringe over. Every single fight is excellent, but my favorite in particular is the one-on-one fight in the elevator. I’m partial to one-on-one match-ups and boy, does this one fit the bill. A good majority of the fight is contained in a single take as well, exciting my intellectual filmmaking instincts as well as my primal instincts to knee an asshole in the face. Merantau is the real deal.

As much as I loved Merantau, it definitely has its flaws. But for a martial arts début, it is nothing short of stunning and Iko Uwais is definitely one to look out for. In fact, you can look out for him to hit a cinema near you soon (or perhaps currently, if you’re in a major market) in the newest collaboration between Uwais and Evans, The Raid! I’m going to be checking that one out as soon as possible. It opens on Friday near me, so if everything goes to plan, expect a review early next week.

And as a small side note, I love the fact that Merantau continues the Hong Kong tradition of having wildly over-the-top, asshole Western characters as the villains. To many non-martial arts fans, I’m sure this would be a turn-off, but for me it really hit the spot. The fact that these Westerners are also of the “super kicker” variety so often seen in Jackie Chan films of the 80s only furthers my love for the film.