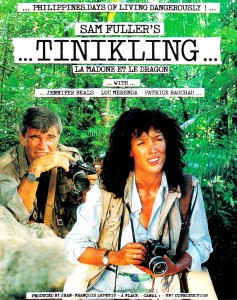 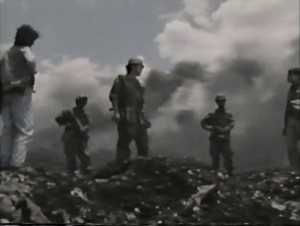 The film opens with one of Fuller’s greatest opening shots, although admittedly most of them are pretty great. After the opening credits play over a world map and news photos of political struggles from around the world, we finally focus in on Manila and the screen fades into a close-up of an old man’s wrinkled face. He nervously recites the Lord’s Prayer, and as the camera moves to the side we see why. A soldier has his rifle planted firmly at the back of the old man’s head. The shot itself is something of a metaphor for the rest of the film and the two basic factions at work in it. There are the militant supporters of the authoritarian regime of Marcos, and there are the oppressed who support Corazon Aquino (the woman who eventually became the first female president of the Philippines and is known as “The Mother of Philippine Democracy”).

It’s not every day that a low-budget TV movie can serve as both a history lesson and as an entertaining film that delivers explosions, gun battles and kidnapping intrigue. The Madonna and the Dragon definitely pulls both off well. Unfortunately, the historical aspects aren’t fully explained so if you’re unfamiliar you’ll have to fill in some gaps yourself, but as this was made only three years after the election it documents, I imagine in its day people wouldn’t have needed as much handholding with the specifics. The realism of the film is bolstered considerably during a few scenes when Fuller utilizes stock footage of the actual political rallies. There’s one street rally sequence that is especially effective, as the photo journalists are there to cover the event and through them we are there to experience it, with actual stock footage bringing it to vivid, realistic life. This blend is an interesting one, and it remains one of the most intriguing techniques Fuller used in his films. At times, it creates something that transcends fiction and becomes more of a docudrama. 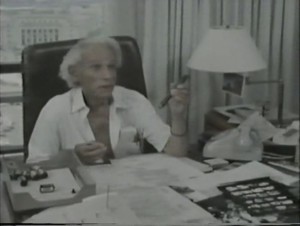 Through all of these positives, The Madonna and the Dragon is still quite the minor film in Fuller’s filmography. It doesn’t quite feel cohesive at times, especially early on. Perhaps I missed a couple of key moments, but it seemed as if it just jumped ahead a scene or two a couple of times. While I was always able to understand what had most likely happened “between the cuts,” they felt like odd transitions that could have all been handled better. I guess that’s what makes this a late-period Fuller film! But defying those late-period expectations, the film also contains a number of excellent set-pieces, most notably a gunfight that occurs inside a movie theater while classic gangsters on-screen also shoot up their rivals. I don’t state a specific film because the end credits relate that clips of Little Caesar, The Public Enemy and White Heat were used, and my memories of those films are all at least 10 years old, so I’m unable to discern what was what.

The Madonna and the Dragon is ultimately not a great Fuller film, but it’s definitely my pick for the best film he made post-White Dog. If nothing else, it’s definitely a film that Fuller fans would enjoy, so hopefully with so many recent re-releases from Fuller’s back catalog, we can hope that a proper release of this one will see the light of day.