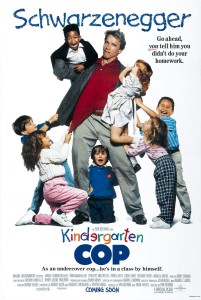 Aliens. Sadistic game show hosts. Evil Martian corporations. Arnold has taken them all down, but these kindergarteners probably came closer to breaking down Arnold’s psyche more than any of them. But as with any obstacle our Austrian behemoth has faced before, Arnold perseveres and discovers the weaknesses of his enemy and strikes hard and fast. His willingness to adapt into the whistle-blowing disciplinarian who also quietly conducts story time shows how versatile and invincible the Arnold persona is. He can overcome anything! In any case, I loved seeing the hard edges slowly melt away from the more traditional Arnold character. I stand by the fact that Arnold is a great actor, and his arc here plays very well. By the end of the movie, you actually believe that he could be a great kindergarten teacher and live out a nice small-town existence. 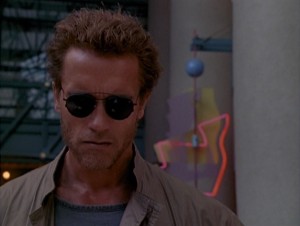 Kindergarten Cop also explores the theme of the absent dad. Kimble is divorced and has a 13-year-old son who he hasn’t seen in a long time. His wife got remarried and basically told Arnold that he wasn’t necessary in his son’s life. This all happened before the film starts, and knowing this gives the intro scene a lot more depth. In that scene Kimble looks like he’s let himself go a bit, perhaps because he’s living alone without much purpose in life outside of his job. What drives him forward is the crusade of catching the criminal Cripes (Richard Tyson), who is “coincidentally” obsessed with getting his son back into his life. Through Cripes’s son and other events in the film, Kimble learns to see the situation with his own son from the other side. He realizes that it isn’t just about him and his perspective; there’s also a boy dealing with the grief of living without a father. Kindergarten Cop ultimately doesn’t address Kimble’s reconciliation with his son, but due to the opening of his heart and his newfound love, it’s not hard to surmise that it did happen. I love all of Arnold’s action films, but none of them have any depth of character such as this, so in this way Kindergarten Cop is one of Arnold’s best and most well-rounded films.

Due to this slow progression of the character away from his action-packed roots, when the inevitable finale of Kindergarten Cop comes around it’s a hard tonal shift to digest. In a matter of moments Arnold and the audience are thrust back into danger. It was harder for me to enjoy this section simply because I had become so attached to the characters and to the life they were leading up to that point. I knew it would all work out in the end, but even still I feared for everyone’s life. Arnold, the consummate action professional, slips back into his old role with ease, but he has lost some of his edge. He is nearly bested by a grandma before his partner arrives to knock her out with a baseball bat. Kindergarten Cop may be seen as a more mainstream entry into Arnold’s filmography, but any film ballsy enough to have a grandma get taken out with a bat is clearly pushing the mainstream envelope a bit. 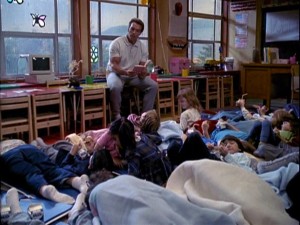 Besides the wonderful character arc that Kimble has, the high point of the film is definitely the humor. It’s not as overt or hilarious as Twins, but the humor here is more touching and woven throughout the entire fabric of the film. Nearly everything in the film brought a smile to my face… even the action-packed opening is funny. The “Who is Your Daddy and What Does He Do?” section got the most laughter from me, and I like to imagine that the kids were improvising their answers. I’m sure the twin girls didn’t spontaneously come up with their dad being a sex machine, but you never know!

Kindergarten Cop surprised me completely with how enjoyable it was, but I can also understand why it didn’t connect to me as a kid. The themes are far too adult for a young child to make sense of or relate to. The absent dad theme isn’t a new or revolutionary idea, but it is one that bears repeating. There are certain issues that are human in nature; they are problems relatable to everyone. This is one of those issues, and I couldn’t think of a better way to be reminded of it than by Arnold and his wonderful accent.

Next up in this chronological journey through the films of Arnold Schwarzenegger is Terminator 2: Judgment Day! Hasta la vista!