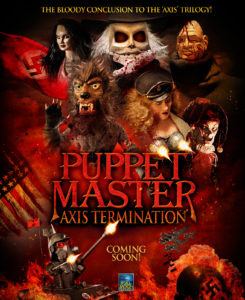 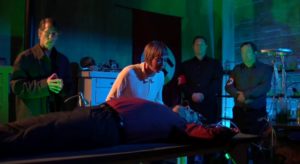 Where it breaks down is that most of the “wizard battles” (as I like to call them), are fought via staring, some computer-generated wavy red lines, and a ton of dialogue. Whoever gains a quick upper hand is able to freeze their opponent where he stands, and then comes the barrage of dialogue. I understand that they have to keep the budget down, but this kind of stalling, drawn-out dialogue is rampant throughout the film. It makes long sections of the film boring and if it weren’t for the flamboyant performances and Band’s love of extreme colored lighting, I’m sure I’d have fallen asleep during one or more of these scenes.

But here’s the thing: I really enjoyed this movie in spite of this glaring issue. Y’know why? I’ll give you one guess and it rhymes with “the wuppets.” 🙂 Yes, the puppets are back and taking more lives than they have in a long while. Leech Woman is vomiting leeches in style, Blade slices and dices, and Tunneller is still tunneling like a champ. Every moment they’re on-screen is a treat, and in terms of special effects this is their best outing in some time. Full Moon’s very successful Indiegogo campaign ended January 21, 2016 and raised $77,750 for the film’s FX budget, reaching stretch goals to fund the return of Leech Woman, Six Shooter and the long-awaited return of stop-motion!!! Before you get too excited, there’s not a lot of stop-motion, but what here’s is great! To imagine this film without these additional elements is to think of a far-inferior film, and I would like to extend my thanks to each and every backer who made it possible. You helped to make the best Puppet Master film in at least 20 years! 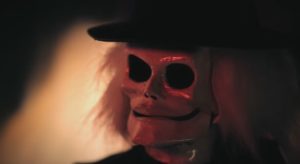 This is a Puppet Master movie for all the fans who’ve stuck with Full Moon through every incarnation of the company. It is a film that will likely not impress a casual viewer, but for those that stuck through the highs and lows of the series, you will appreciate and notice every last dollar that went into this production. From higher quality set dressings and costumes, to a myriad of physical FX work and gore, Puppet Master: Axis Termination will satisfy the hardened Puppet Master fanatic. I even liked the over-the-top CG blood, and I hate that stuff! But like the rest of the movie, it was done with passion and a campy exuberance that B-Movies fans should heartily enjoy. Thanks for taking your time with this one, Full Moon!

I should also probably note that during the IndieGogo campaign Full Moon said this film would be the return of Torch, but unfortunately he’s not in the film.

Next time I get around to a Full Moon movie it won’t be October so I’ll be watching the Moonbeam fantasy Magic in the Mirror! See ya then!