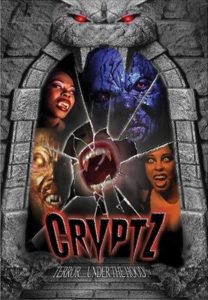 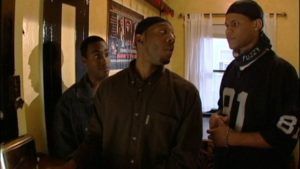 While the story is nothing new, Cryptz digs in deep and embraces its roots as a horror film. The budget doesn’t allow for a lot of FX work, but regardless there’s actually more gore and the like in Cryptz than the standard Full Moon horror film. The film could have worked without these gruesome moments, but I appreciated the filmmakers going the extra mile to provide some of the gross thrills that the horror genre generally provides.

Full Moon films are also generally on the comedic side of things, and Cryptz is no different. What sets this one apart is that it brings in humor without ever betraying the dark tone of the horror. It is both scary and funny, and often times the laughs come right out of the moments when the characters are in the most danger. As the three main characters are rappers, their strong handle on language drives the comedy and the film onward at a brisk clip. 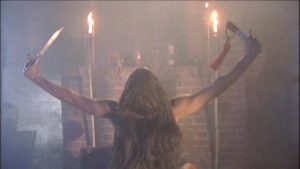 But the number one defining factor that makes Cryptz great is its acting. That’s probably the first time I’ve ever said this about a Full Moon movie, and I can’t say that it’s something I ever really expected to say. But it’s true! The whole cast clicks with each other remarkably well, and it makes Cryptz a film that’s ridiculously easy to buy into. Not only did I believe that these guys were amateur rappers, I also believed that they had what it takes to create music worthy of public consumption. Are the actors rappers? I doubt it, but I don’t know. The fantasy is perfectly constructed through the performances. I mean, don’t go in expecting some Oscar-bait tear-jerking performances, but in terms of Full Moon films the acting is definitely on another level.

It’s not all good acting and fun horror, either; there are lots of “only in a B-Movie” moments that up the entertainment factor considerably. There’s a voodoo priest who does kung fu (and the actor who plays him was Morpheus’s stunt double in The Matrix). Tymez grabs a leg bone from the floor and defends himself from vampires by swinging it wildly in the air, never hitting them… and it works! Cryptz is just a fun movie that scratched my B-Movie itch. I can’t completely explain it, I just liked what I saw. Except the “action.” That was pretty bad, but the rest of the movie was enjoyable enough to make me quickly overlook this and have a good time.

Next time I get around to a Full Moon movie I’ll be watching Peter Manoogian’s 1997 Moonbeam flick The Midas Touch! See ya then!