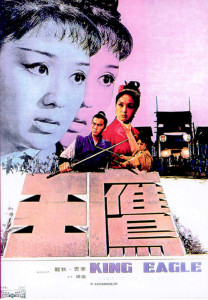 By focusing on this contained struggle, the film can really explore its characters, and their motives and desires. Where most wuxia seek to place their story within a larger, grand narrative, King Eagle is content to simply be a single, well-told story. This makes it a much more digestible movie, and one that is much more satisfying than a traditional wuxia film. King Eagle also manages to showcase situations and confrontations unique to the genre, such as an extended scene where King Eagle must hold a massive, fully loaded cart in place so that it doesn’t crush a child. This then leads to a small fight on the cart while it’s rolling! Later films would do things of this nature much better, but it’s still quite exciting to see them pull off something so ambitious as well as they do here.

The action was choreographed by Tang Chia and Yuen Cheung-Yan. Together they had previously done Have Sword, Will Travel and Vengeance! for Chang Cheh, both to smashing results. The offerings here are definitely less stunning, but for the sheer number of fights and the impressive display of varied weaponry, King Eagle is still totally worth your time. There are also lots of fun, inventive moments of violence that elevate the film over the average Shaw swordplay film, such as when Ti Lung knocks a guy towards a tree, throws his sword at him and pins him to the tree’s trunk with the sword through his torso.

Here we see Chang Cheh continuing to refine his films, and one aspect I found especially interesting about King Eagle was the way he handled the opening credits. Instead of the standard credits over nice shots of swords or simple animations (all standards for this era of Shaw films), King Eagle has credits that slowly fade in while action and story plays out. This is nothing spectacular, I know, but it’s something that you just don’t see in the earlier Shaw films. In King Eagle, an entire arc of story has taken place by the time the credits end, dropping us into the film ready to rock. I’m sure it was devised as a way to save time and money, but it also works beautifully as a storytelling device.

The acting is also a bit ahead of other Shaw pictures, with Ti Lung giving a great performance as the lead, and Cheung Pooi-Saan hamming it up in fine form as the villain. But the true standout of the film is one Li Ching — no make that two Li Chings! She plays dual roles as a pair of sisters, with each character coming off as a distinct human with emotions, desires and drive. She’s superb in both roles, and during the finale even gets to fight herself for a bit! She has long been one of my favorite female actors in the Shaw stable, and her dual performance here only solidified that.

King Eagle is a minor Chang Cheh work, but that doesn’t mean it’s not wonderfully executed and a lot of bloody fun. It features tons of action too, proving that it is possible to have a truly compelling story in a film loaded primarily with fights and action. Definitely recommended to martial arts fans.

Next up in this chronological jaunt through the Shaw Brothers Martial Arts catalog is The Lady Hermit from director Ho Meng-Hua and featuring the one and only Cheng Pei-Pei! But it won’t be coming until January, as the series takes a backseat during our year-end, closeout event: Futures Passed!