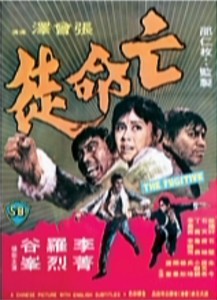 Due to their grindhouse status in the West, Shaw Brothers films are often looked down upon as B-Movies. I firmly disagree and I try to reflect this opinion in my reviews of the films. But some of their films are definitely B-Movie material, and The Fugitive is a perfect example. While it is a great little action movie, it has a threadbare story and is so over-the-top at times that you could never take it seriously. These things matter in many films, but in a B-Movie these are the cherries on top. And The Fugitive is pretty damn cherry-tastic.

The film opens on a wanted poster depicting the feared outlaws Liao Fei Lung (Lo Lieh) and Ma Tien Piao (Ku Feng). These very same men ride into town and hold up the bank. Things don’t exactly go to plan, but these bandits are not your average bank robbers — they are experts in horseback riding and marksmanship! The bandits easily shoot their way out of town with the spoils of the robbery.

If you’re thinking this sounds like the beginning to a western (perhaps The Wild Bunch?), then you wouldn’t be wrong. Not only does the film feel quite influenced by the western genre, it also uses a great deal of the heavy, revenge-driven Ennio Morricone score from Sergio Leone’s Once Upon a Time in the West. Even if the music is stolen, when it’s laid over a tense, dramatic showdown in the middle of a small-town street, the only word for it is awesome. The music is very skillfully used and it heightens the thick bandit melodrama considerably.

The film’s action is also quite unique. There are some martial arts sprinkled throughout, but most of the thrills come from the barrel of a gun… or a lot of guns, I should say. The gunfights here are incredibly thrilling and fun, with the bandit anti-hero shooting every last enemy with superior skill and accuracy, and every enemy missing the bandit anti-hero like blind men trying to hit a target 1000 yards away. Is it logical that Lo Lieh could survive a gun battle on the ocean rocks when he’s fending off maybe 50 or so policemen by himself? Of course it’s not, but woo-wee it is a good time. Add in a very healthy amount of wonderfully gratuitous Shaw Brothers blood sprays and you have yourself a fantastic little slice of action heaven.

The Fugitive isn’t the type of movie to win awards or cause a big stir, but it’s 76 minutes of pure entertainment. The story is perhaps its weakest element, but anyone that loves a good revenge tale will look past this flaw with ease. Besides, who needs a great story when you score your revenge with Morricone? The Fugitive also features a plethora of great “Lo Lieh looking suitably badass” moments, a commodity that should be highly treasured in this reviewer’s humble opinion. The Fugitive might not be as good of a movie as The Casino was, but director Chang Tseng-Chai clearly knows how to churn out great fun. Definitely recommended to Shaw fans who enjoy gunplay movies.

Next up in this chronological jaunt through the Shaw Brothers Martial Arts catalog is Teddy Yip Wing-Cho’s The Black Tavern! Bring it on! See ya then!