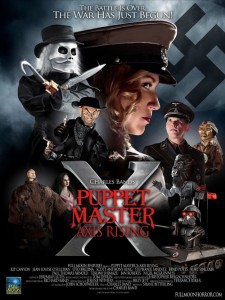 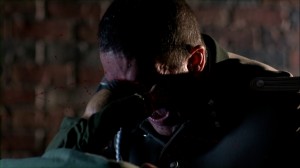 So the main question on people’s minds with this film is: how are the puppets, and how much screen time do they get? I’m happy to say that the puppets fare much, much better than they did in Axis of Evil. The puppets themselves are of much higher quality construction and they’re in the movie a lot more. It’s still nothing like the first five films, but judged against the 6-9 series entries, Axis Rising has much more puppet action than probably any of those. They still don’t get a lot to do until the end, and the “action” is more laughable than realistic, but the key thing is that it’s fun. In fact, this is easily the best Puppet Master in years, probably since Curse of the Puppet Master (Part 6), although I loved the unintentional laughs of Retro Puppet Master.

The new Nazi puppets are also a lot of fun, even if they’re only around towards the end of the movie. They fight our puppet heroes, but it’s pretty disappointing if you’re coming in expecting the old school stuff. Good thing I wasn’t! I actually really enjoyed the puppet battle. I wish it was longer and more drawn out (probably the first time I’ve said that about a Full Moon movie), but for what it was, it was a lot of fun. The puppeteering is also rather well done. These days all the puppets are rod puppets, which makes bringing them to life that much harder. It’s easy to sit back and criticize, but at the end of the day a lot of hard work went into the film and they did a great job with the budget they had. Sure, it doesn’t live up to the old days, but what modern Full Moon movie has? Those days are over, so in terms of the modern Full Moon film, Puppet Master: Axis Rising is hands down one of the most impressive entries. 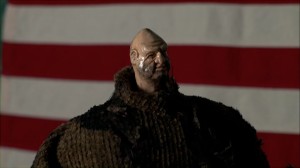 It’s also Charles Band’s first film without nudity in some time, and the restraint here shows his reverence for the series that made him a household name for horror fans. There’s still Stephanie Sanditz in her underwear and flaunting her cleavage around a bit, but compared to the orgy in The Dead Want Women, or the entirely shameless Killer Eye: Halloween Haunt, Axis Rising is a tame, Catholic educational film. Band also recreated the look and feel of the previous film perfectly. It really looks like Axis of Evil‘s sequel, right down to the shitty set dressings with American flags hung on the walls of Danny’s room. This time around, it feels like a nod to their previous film instead of a pure budgetary issue, though, so instead of faulting them for this, it added to my enjoyment.

The acting is also pretty good from most of the cast. Brad Potts was one of the best things about Zombies vs. Strippers, and he’s also one of the best things in Axis Rising. Give this man s’more work! He can actually act and he’s got some of the best facial expressions I’ve ever seen. C’mon, Charles! There’s gotta be a new series bangin’ around in your brain that you could wrap around this guy! How ’bout some sort of RoboCop-ish bionic cop that takes out dinosaurs? Just spitballin’, and maybe that’s outside your current budgets, but I’m sure we could kickstart the shit out of that! Anyway, the people who aren’t Brad Potts are also good, but not as good. I really enjoyed Oto Brezina as the Nazi’s puppet master, and Jean Louise O’Sullivan was a good fit for her role. The Nazis, on the other hand, weren’t as impressive, and by that I mean they were so bad they were great. Neither Stephanie Sanditz or Scott King could produce a consistent German accent to save their lives, but their failing, in-and-out accents were some of the most enjoyable moments in the film. Sanditz especially has some choice moments when you can almost feel the wind in your hair as she takes you on a whirlwind trip through Europe via her accent. I mean this all in good fun, of course, as it added a lot to the film, but others might not be so forgiving. 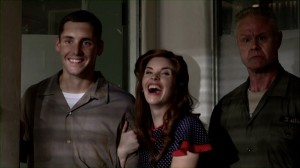 Axis Rising also does another thing perfectly right: there’s no Ninja. Don’t remember him? That’s because he was completely forgettable and horrible! Introduced in Axis of Evil, he was quite possibly the worst puppet ever to appear in a film. I hated him, but I hoped that maybe he’d fare better in the sequel. Even better, the characters “lost” him so he’s not even in it. Perfect. The new Nazi puppets are actually really fun, exaggerated archetypes. They don’t do a whole lot, and Kamikaze is incredibly racist (the reasoning behind which was explained rather well in the film’s behind-the-scenes VideoZone feature), but the new puppets inject a lot of life into the film. I wish they did more, but y’know, them’s the breaks. I was also unclear of what happened to some of them at the end, so I can only assume that they’ll be back for more. Band has committed to producing a Puppet Master every year or so, and if they’re all at about this level of quality then I’m totally OK with that. I’d prefer they went up in quality, but this is a great baseline. I love the Puppet Master films, and Axis Rising is hands down the best film in the series in a good 14 years.

Next week on Full Moon Tuesday, it’s a trip back to the ’80s with the inner city action of Enemy Territory!