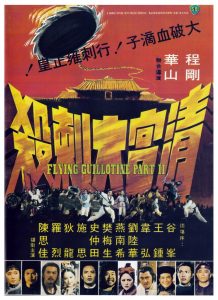 What saves Flying Guillotine 2 from utter disaster is that, no matter what, it’s still super fun (provided you’re already in love with the Shaw Brothers style of filmmaking). The innovations to both the flying guillotine and its counter-weapon are fun and unique. Despite the otherwise poor writing, the characters are well-defined and deserve to be in a better, more complete film. I always enjoy Shih Szu’s work, and her character here, learning the new guillotine along with a bevy of her friends, is really fun and sets the film apart from others. Their flamboyant purple costumes only add to the charm. But above all, the most important element that keeps the film above water is the action.

Choreographed by Tang Chia, the action in Flying Guillotine 2 is excellent. That’s not to say that it doesn’t vary in quality like the rest of the movie (the two-minute slo-mo ending was a bit much), but on the whole it’s great stuff. Everything featuring Ti Lung is top-notch weapon work for the era, especially during the lengthy finale. It morphs through multiple stages, weapons and combatants, too, including some fantastic hand-to-hand interplay between Ti Lung and Ku Feng. Tang really gets to stretch his imagination with the film, as this one ventures deep into the wuxia territory that the original film only hinted at. I imagine this is due to the success of all the Chor Yuen films revitalizing the wuxia genre, but I don’t have any concrete evidence to support that.

Flying Guillotine 2 isn’t a great movie, but it is an action-packed sequel that remains enjoyable in spite of its faults. I have a feeling the film will play better a second time around when I’m not expecting a full-on Ti Lung movie, too. As the first film of 1978, it’s not the best debut, but that’s OK, Shaw released 20 other martial arts film that year, including some of the genre’s best and most treasured classics.

Next up in this chronological journey through the Shaw Brothers Martial Arts catalog is perhaps the most well-known of all the Shaw Brothers’ films: Lau Kar-Leung’s legendary 36th Chamber of Shaolin! See ya then, and let’s all cross our fingers it doesn’t take me another year to do it! 😛