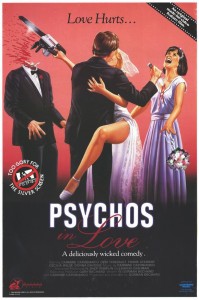 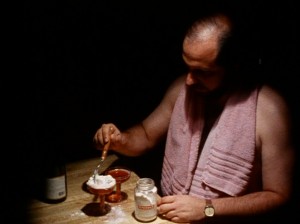 But let’s not discredit that fact, because at its heart Psychos in Love is a comedy. Your ability to see it as such depends directly on the darkness of your soul, and as mine is about as black as the night is long, I thought it was pretty damn amusing. I have to imagine anyone that also loves the horror genre as much as I do will also have the requisite dark humor to appreciate this one. One of my favorite moments is when Joe is going to poison a girl with a spiked drink. He spoons out some powder into the drink, and then adds another, and another, and another, and then dumps the whole bottle in. Then we cut into a tight close-up on the glass as Joe’s fingers mix the sludgy, ridiculous mixture together. Then he hands it to the clueless girl who takes a sip without batting an eye. Hilarious. And there are tons of funny moments like this throughout.

Psychos in Love is exceptionally well-made for an amateur feature too. The editing is excellent, with the pace moving quickly through the film’s many murder segments. The first clue that it’s more than just your average horror film are the very funny interview segments in black & white that seem quite prophetic in the current reality TV obsessed culture. Sure, Woody Allen talked to the camera in Annie Hall 10 years before this, but these segments are peppered throughout the film in exactly the same way they are in a reality show, and with the distinct visual style, they even echo the presentation of current TV. And speaking of presentation, the film is also really well-shot. The color depth is impressive and the bright red, ever-flowing blood looks great. I had incorrectly assumed that this would be a shot-on-video affair, so the fact that it was shot on film, 35mm no less, and that it looks fantastic, were major bonuses. 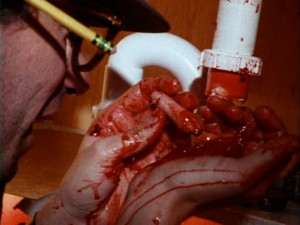 I do have a couple of problems with the film, but those are realistically rather minor in the face of all this depraved fun. First, because of the nature of the plot (or really, the lack thereof), most of the movie is comprised of random scenes of our lead characters killing other random people. Later in the movie there’s a little more going on, but even then it’s mostly the same. It’s always funny, but it does get kind of tiring after a while. Second, it’s incredibly trashy. While this isn’t specifically a problem for everyone, it definitely holds the film back from being more palatable to a wider audience, and perhaps is the reason Bechard isn’t more well-known. It’s definitely not as trashy as it could be, but when literally every female in the movie has a nude scene, you know you’re treading in the trashy end of the pool.

Beyond the quality filmmaking and the abundant gore, the two leads do an excellent job with their characters and really hold the movie together. Watching a couple of people murder random strangers with little to no plot sounds like a perfect recipe for a shit, boring movie, but watching Carmine Capobianco and Debi Thibeault together is fun, entertaining and thoroughly enjoyable. Psychos in Love is definitely not a film that will play well to all audiences, but horror fans will find much to love.

Next week on Full Moon Tuesday, only Netflix knows what I’ll be getting! Everything I’ve searched for has been unavailable or on short wait, so I stacked a whole mess of trashy, short wait movies at the top and hopefully I get a good’un!