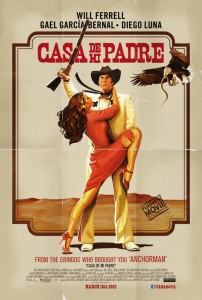 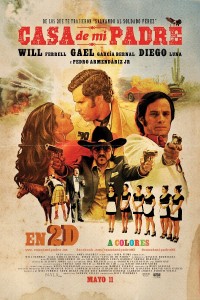 But general plot points and boring descriptions of them don’t matter so much when every moment of the film is dripping with thick, gooey melodrama. Every conversation is taken to wonderful heights of melodramatic hilarity, and each scene seems to one-up the last. There are so many great scenes of melodrama here that I’m stuck trying to pick just one to single out. Do I go with the hilariously long-winded explanation Ferrell gives as to what his perfect woman would be? Or how about the exchange he has with his brother about how Americans are babies and their women shoot heroin and stuff their faces with pasta? Or perhaps the incredible dream sequence, too awesome to spoil? I can’t choose; they’re all so good.

I’ve long been of the mind that one-note Will Ferrell films are boring and would be better as shorts, but this is easily the best Will Ferrell film I’ve seen. It works as a genre/style parody and as a real film within that genre, something that very few of these throwback films can actually muster. The direction from first-timer Matt Piedmont is also excellent, wringing every bit of beauty out of nearly every shot in the film. I’d never have expected this one to be one of the best shot movies I’ve seen all year, but it is. The bar scene is especially nice, with a red hue cast over everything on-screen, but the best looking moments for me were the action sequences. 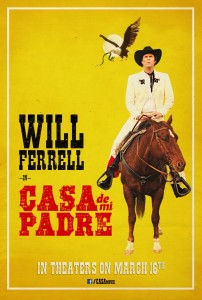 I haven’t seen many Mexican films, but I’ve seen enough to know that many of them feature some sort of gunfights involving cowboy hat wearing dudes in front of a glorious, Spanish-style hacienda. There’s always a few guys on the roof too, wielding Uzis or shotguns. And in Casa de mi Padre there is indeed a scene of this nature, and it doesn’t disappoint. The action here, and throughout the film, is just as over the top and melodramatic as the dialogue, which translates to lots of big, bloody squibs. I saw this movie a couple of days before I saw Django Unchained, so originally I had written a lot of stuff about how the big, bloody squibs were great and needed to be in movies more. It made the giant squibs in Django feel like my comeuppance for wishing such a thing, but the difference in tone between the two films is a perfect example of why the squibs work here and not in Django. This film is a comedy, so the violence doesn’t need to be realistic or carry any weight, but Django unsuccessfully tried to work on both levels. Anyway, I loved the squibs in Casa de mi Padre, and they only added to my enjoyment of the film.

As a fan of ’60s and ’70s cinema, I must make mention of how perfectly they nailed the set designs of the studio-based, fake outdoor sets. If you’re not familiar with older cinema, the scenes around the fake pond might garner a laugh because of how obviously fake the whole thing is, with an easy to spot background matte painting, and the telltale water looking much too man-made. But that’s simply missing the point, as it is an absolute pitch-perfect rendition of the sets that populated so many films of the era, from Mexican melodramas to Shaw Brothers martial arts films. I loved how well they pulled this off, and they do so equally well with the rear-projected driving sequences, the model work, and the use of animatronics and puppets. These subtle nods to film production techniques of day’s long past are faithful and hilarious, and I just loved them.

Will Ferrell also pulls off the feat of acting completely in Spanish without a hitch. It’s never an issue — not even once — as he’s completely believable in the role. It’s incredible how well he fits into the film. That being said, I’m not a Spanish-speaker so I have no idea how well he was pronouncing everything, but it sounded nearly perfect, a fact hammered home by a great joke about “White People Talking Spanish.”

Through all the love and entertainment, the film does drag a bit in spots. This is only an issue for a few minutes here or there, and then we’re off to have another wildly over-the-top dialogue exchange or to sing a quick song. Yep, I said songs, and they’re fantastic. Casa de mi Padre is comedic pastiche done right.