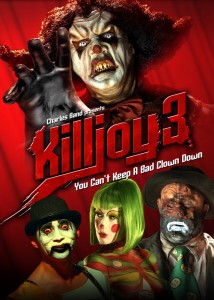 Clearly this film was made by someone who enjoyed the first film and wished to bring back some of the things that made it great. The first and foremost is Killjoy’s hallucination realm that he draws his victims into. This version is nothing like the haunted urban alleyways of part one, but it reflects the shift in tone. Here we have a throne room, a boxing ring and a devilish feast fit for a demon and his minions. Killjoy 3 also brings back interesting characters, and while they’re all somewhat clichéd and obvious, after Killjoy 2 nearly anything would be an improvement. I attribute these positives to writer/director John Lechago.

This is Lechago’s fourth film, and I have to say, it was really well made. Killjoy 3 was filmed in China at the same time Full Moon was shooting Puppet Master: Axis of Evil there, but Killjoy 3 is definitely the better film, by a long shot. In Puppet Master the sets were rather poorly dressed and threadbare (even if they did feature some amazingly well-crafted wooden, stand-in kitchen appliances), but in Killjoy they are dressed well enough to not make you wonder if it’s all just a back corner of a Chinese warehouse in disguise. Beyond the sets, Killjoy 3 is well-edited and shot, feeling much more like a real movie than many of Full Moon’s other recent films. It still has that modern sheen to it, and an over-reliance on poor CG in spots, but the sheer fun of Killjoy 3 overrides nearly all complaints you can throw its way. 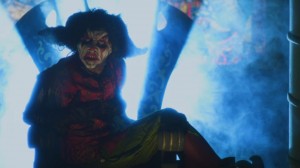 Trent Haaga also does a much better job here than in Killjoy 2. I still miss the original Killjoy, Angel Vargas, but Haaga has successfully found his Killjoy and it works well enough. The addition of the minions adds an extra layer to this film as well, allowing it to be much more comedic and different from the simple “Killjoy hunting down his victims” thing that had become obvious by this point in the series. That’s not to say that I liked the minions specifically, I actually thought their idea was better than their execution. Punchy is the most successful, but Freakshow’s Kuato-baby is woefully underused (but really, there’s only so much you can do with a baby attached to your side, and I have to admit they surprised me towards the end with this character) and Batty Boop is just annoying. That damn voice of hers was awful, but I think you’re supposed to focus on her naked, body painted body instead of what her voice sounds like.

Killjoy 3 is a revelation for the series, taking it to new heights and creating a fun, horrific little movie. Sure, it’s predictable, but it’s dumb fun and it’s only like seventy minutes. I’m sad the black has been drained out of the series, but I’m glad that Full Moon resurrected Killjoy with such a strong effort, something you can’t generally say about their sequels years after the original… I’m looking at you Demonic Toys 2. Full Moon also recently announced that “the team behind Killjoy 3” will be bringing us all Killjoy 4: Killjoy Goes to Hell. Bring it on.

Next time I’ll be checking out the latest Full Moon film, Zombies vs. Strippers! The trailer is rather gory, so I have high hopes!