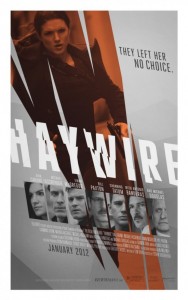 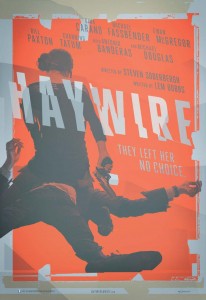 That’s not to say that there isn’t action in Haywire. There’s a lot, actually. The sequences are quick and dirty, confined mostly to hand-to-hand fights and a couple of good chases. But what’s interesting about Haywire is Soderbergh’s focus on downplaying the action. While most directors would go in excited, injecting emotion and intensity into their action scenes, Soderbergh again continues to subvert and decides to simply allow the fight to stand on its own. There’s no score over these moments to punctuate the reality of the situation, it’s simply two combatants battling for their lives. Soderbergh has always been concerned with bringing reality to fiction filmmaking, perhaps most obviously in Contagion, and his “action” picture is no different.

As a martial arts fan, the fights aren’t as exciting as I know they could be, but for what they are, they’re pretty fun. The hits to Carano look hard and real at times, making me wonder if her background as an MMA fighter allowed the actors and stuntmen to get actual shots in to sell the reality of the fights. I think not, but there were a couple of hits to the face that looked “convincing”. Her fight with Michael Fassbender is the centerpiece to the film, and its showiest moment, but for me the earlier fight that led out of a lengthy foot chase was my favorite. Fassbender looked a bit out of place next to Carano’s obvious skill, but besides some nitpicking, I think he held his own well. Carano’s use of choke holds and throws reminded me instantly of Donnie Yen’s choreography for Flash Point, and I have to wonder if Soderbergh caught that film and it led to the genesis of this experiment of casting a genuine MMA champ in the film’s lead role. 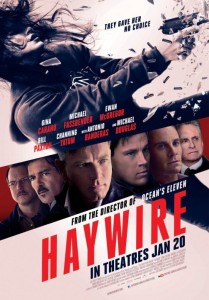 Much controversy surrounded the film’s release over the dubbing of Gina Carano’s voice. The producers and Soderbergh have been purposefully vague and specific in their use of the word “altered”, so it seems like they passed her dialogue through some filters when creating the final mix instead of truly replacing her voice with another. In some scenes this is remarkably noticeable, and in these moments you can’t help but question the decision. Could her voice, and its delivery, have been so bad that this is better? I’m no stranger to shitty dubbing, but thankfully it doesn’t overtake the film, which is sparse in its use of dialogue anyway.

Haywire is also a very stark film without any emotions being forced at you. The score sells the coolness of Carano’s action, but it rarely scores the moments that would traditionally be played up in a mainstream film—yet another example of why this is one of Soderbergh experimental B-pictures. Like Contagion‘s, Haywire‘s score is nothing short of perfect. It expertly locks into the visuals and creates a mood that is thick, distinct and groovy. The score is driving, retro-styled modern funk and gives the film a 70s action/Blaxploitation vibe, and I loved it. The best example of this is during the hostage rescue scene early on. The scene plays out without sound or dialogue, choosing instead to feature the funky score exclusively. It retains the tension of a traditional scene, with the relentless funky groove ratcheting up the intensity as the scene plays out. This could be my love of funk and groove-based music talking, but I thought the score worked brilliantly (and have been surprised to see many people knocking it).

I’ll admit that it is a little strange to have such a low-key action movie filled with huge A-list stars, and perhaps it was a ploy to get people to go see it with an unproven first-timer in the lead role, but I think it would have worked better with a team of fresh-faced newcomers filling out the entire film. The big actors worked fine and they do their jobs well, but there are times when it seems like they want to break free of the film’s laid back vibe and strut. They crave the attention, but Soderbergh flatly refuses them that in Haywire. I greatly enjoyed watching the film, but this is definitely one that will split the room.