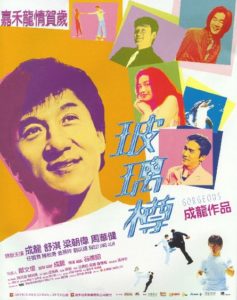 Bu (Shu Qi) is a romantic girl living in a small, island village in Taiwan. She loves the local legend of a couple who loved each other so deeply that they transcended their human form after death, becoming dolphins and living together forever in the bay around the island. She was named after the woman in the tale, and she even has a friendship with a dolphin! She’s a charmed personality, not supernaturally, but just in her spirit and lust for life. One day while hanging out with her dolphin pal, she finds a message in a bottle that traveled all the way from Hong Kong. Her mother was originally from Hong Kong, so Bu decides to throw caution to the wind and track down the man who sent the romantic message on its ocean journey.

Eventually she meets C.N. Chan (Jackie Chan), a wealthy stock trader who owns a recycling company and has an amazing ability to fend off groups of attackers with only his wits and whatever items are within reach. She quickly falls for him, but he’s a single playboy who needs some convincing when it comes to love. If you’ve seen a romantic comedy, I’m sure you’ve seen this basic story before, but this is a Hong Kong romantic comedy so it definitely has its own unique flavor that fans of the genre might enjoy exploring. I know I did, and I’m no connoisseur. I did have to overlook the 22-year age difference between Shu Qi and Jackie that makes them kind of look like father and daughter, but since the movie is already pretty fantastical it’s not that big of a stretch. That, and like 90% of movies share this unfortunate trait, so it’s not like it’s a unique occurrence here.

I’m not familiar with director Vincent Kok, but judging from his work on Gorgeous I’d say he’s more suited to direct comedy than a traditional action film. The comedic elements come through wonderfully, and in many ways this is one of Jackie’s funniest films. Even within a couple of the fights, the quality of the humor is really high and seamlessly woven into the action. My favorite of Kok’s tricks, though, is his usage of long takes. The film is filled with varying forms of the technique, from Steadicam tracking shots, to something more static that just allows the actors to inhabit the space and the dynamic between their characters. The honesty in a long take is undeniable.

The film’s action can be broken into two groups: the well-loved “Jackie using his surroundings” style, and the hard-fought battle between Jackie and a fierce competitor. The first “surroundings” fight takes place on a boat and it is the weakest of the film. It’s great stuff, but other than some genuine laughs, it’s nothing especially new or astounding (in relative terms to Jackie’s other Hong Kong films). The second fight in this style is far superior, showcasing Jackie fending off a group of bat-wielding thugs wearing rubber masks of Jay Leno and other celebrities. It’s a bit short, but this is a great, jam-packed fight that has probably been overlooked due to the film’s overbearing romantic angle, but it really deserves to be seen.

That leaves the one-on-one fights with Australian martial artist Bradley James Allan, who was apparently the only non-Chinese member of the Jackie Chan Stunt Team (according to his bio on the HKMDB). This might sound like hyperbole, but these two fights are nothing short of incredible. They are easily among the best one-on-one battles Jackie has ever put together. I thought the first one was great, and then the second one ends the film and it’s even better! What really pushed them over the edge for me was deep, mutual respect that both characters exhibited for their opponent, showing how committed practitioners of the martial arts are really members of a special brotherhood that rewards practice and ability. If you consider yourself a Jackie fan they are without a doubt must-see material. The athletics and agility on display are top-notch, and while I did notice a couple of doubled moments on Jackie’s part, these fights easily make Gorgeous quite the worthwhile watch. If you’re not down with the romantic angle, I implore you to at least look up the fights on YouTube or something. There are even a couple of Kok’s long takes contained within the battles, which is of course amazing. Seriously, just watch them!

It’s fitting that Jackie’s final film of the ’90s, a decade that saw Jackie embracing a bevy of different directors and each one’s unique style, would be perhaps his most bold and unique in this regard. Gorgeous is a kind of film that I never would’ve expected from Jackie; the idea of mixing romantic comedy with the martial arts movie is a pretty big stretch. While I can’t say that the film is especially cohesive with these disparate elements, it is one that works quite well as a general entertainment experience if you divorce yourself from any expectations. For instance, this is probably the only film to have a training montage scored with a lush, romantic pop ballad and I wouldn’t have it any other way. What can I say, I was charmed and thrilled in equal measures.

I should also note that I watched the original Hong Kong cut, which is roughly 20 minutes longer than the US cut. It seems the edits are mostly around Shu Qi’s character, which is weird because she’s essentially this film’s lead character. So judging from the edits, it would seem that the US edit attempts to make Jackie more of the lead, but I can’t see that working too well given the structure of the film. Gorgeous begins with Bu and her romantic vision of the world, and it is through this lens that the entirety of the film is presented to the audience. Without that, I imagine the film plays rather disjointedly. They also cut out a hilarious cameo featuring Stephen Chow! So if you can hunt it down, I definitely recommend the original edit.