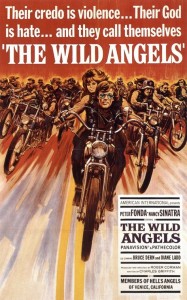 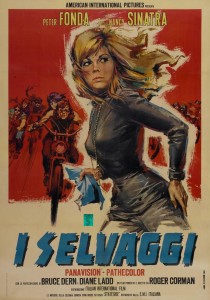 Amidst a pretty chaotic fight over mariachi music, some highway patrolmen kick down the door and attempt to break up the ruckus. The Angels flee… all except for the Loser, who jumps on the nearest police motorcycle in order to escape. He is chased down by the other officer as the two speed along precarious hilltops before The Loser is shot in the side. The officer loses control shortly after, flying off a cliff as The Loser hits the pavement, blacking out in front of a police roadblock.

Meanwhile the other Angels, never doubting their comrade, assume that he made it safely away. They set up camp in a palm-lined desert oasis and begin partying. In an extended scene, the viewer is treated to a mishmash of silly-ass Hells Angels hijinks. You have women bullfighting motorcycles in their underwear, grown men chasing bunnies around in bushes, and bikers jousting around in the sand with palm branches. It really is a pretty pathetic scene as the Angels act like a bunch of rowdy, unsupervised Muppet babies…  And I’m sure Sonny Barger is somewhere out there, reading this review, cursing me and rubbing his thumb along the edge of a sharp blade because I just compared his gang to a twenty-year-old Saturday morning cartoon. Anyway, it isn’t until a guy starts huffing down ether that Blues draws the line and puts an end to the party by knocking the dude out. 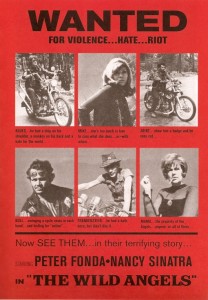 Later, The Angels get wind that The Loser is in the hospital on life support. Deciding that they are much better trained to deal with his life-threatening emergencies than a bunch of medical brass, they decide to sneak in and spring him. Blues’ Girlfriend Mike (Nancy Sinatra) poses as The Loser’s wholesome, middle-class sister and unlocks the doors so the rest of the guys can break in, rape a black nurse, and wheel The Loser off to safety. Not surprisingly, The Loser isn’t doing so well back at home, so the Angels throw him down on their finest swastika’d linens, gather around and listen to his dying wish.

“I just wanna get high.”

They pass him a doobie, he puffs, and dies.

In what has to be the highlight of the film. Plans are laid out for The Loser’s funeral. The Angels gather in a quaint little church in the woods. A very uncomfortable preacher makes his way down the aisle before taking the podium to deliver his sermon. He is not two sentences in, when a very distraught Peter Fonda tells him essentially, to stick all that preachy Jesus stuff up straight up his establishment ass. What follows is a masterfully orchestrated but completely depraved party sequence. The Angels sink to horrific lows as they completely destroy the church by tearing up pews while carving swastikas into the walls and beating the preacher unconscious. Angels break out cartons of beer and whiskey as they crank up the debauchery in a frenzy of congas and go-go dancing. Gallons of alcohol fly through the air as The Loser’s corpse is yanked out of his coffin and posed amusingly, Weekend at Bernie’s style.  Meanwhile carnal bikers take turns drugging and raping The Loser’s wife behind his casket. 45 years after it was originally filmed, this scene still shocks. 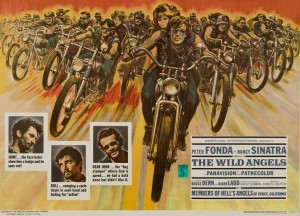 Roger Corman’s camerawork is functional and effective here, although I’m having a hard time understanding the point of the film itself. It is a pretty ballsy and accurate depiction of the Hells Angels, especially considering the time it was filmed. If it was Corman’s intention to de-glorify the notorious gang, then on that front it succeeds remarkably. They really come off as a bunch of depraved animals with zero respect given, and none received in return. For all their bitching and moaning about “Just wanting to be free to ride our machines without being hassled by the man” they sure like to draw tons of heat upon themselves by fighting and raping their way from town to town.

For reasons I’ve never really been able to put my finger on, the Hells Angels were fascinated with swastikas, the iron cross, and other miscellaneous Nazi horseshit. And this film does not shy away from it in the least. They are virtually everywhere in this film, on walls, on helmets, across beds, draped over coffins, and even in the main title of the opening credits. I don’t know if this was a creative decision on Roger Corman’s part to further drive the viewer into an even deeper disgust of the Angels, but it is very effective in doing exactly that.

Listen, I love badass, hog-riding rebels as much as anybody. But don’t go into this film expecting any new anti-establishment heroes to look up to. The Angels in this film are just plain disgusting and anything but respectable. This definitely is one of the classics of the outlaw motorcycle genre, even if it does stray from the typical formula a bit.