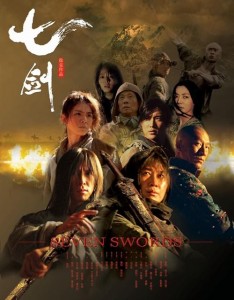 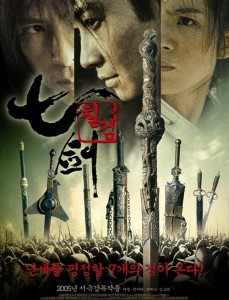 Tsui Hark thought of this as something of a comeback film, as after his stint in Hollywood he hadn’t really made anything that anyone really cared about, or at least anything that was all that well-regarded. In any case, this is definitely a big movie and one worthy of your time if you’re a Tsui Hark fan. Most importantly it feels like a Tsui Hark film: from the somewhat fractured storytelling to the blurry, jerky slow-motion (as opposed to dreamy, fluid slow-motion) seen in many of his films. But Seven Swords feels grander and larger in scope that many of his previous pictures, with something of a Lord of the Rings feel to it visually. The cinematography is especially great, with all kinds of gorgeously composed shots and colors filling your screen.

What’s the most frustrating about Seven Swords, though, is that it was made in 2005. Due to this, it suffers, as most HK films of the era do, from trying to feel closer to a Western-produced film. The editing here is at time very questionable, and there’s a ridiculous overuse of closeups during the action scenes which obscures a lot of the great choreography. If only this had been made at Hong Kong’s height, the late 80s/early 90s, then we’d see the full potential of a movie about seven badass swordsmen from Mount Heaven with seven badass swords facing off against a horde of devious villains with warpaint and equally devious weapons. To simply dream of what might have been is missing the point that this Seven Swords, the only one that truly exists, is pretty damn good.

It’s also a mistake to think of Seven Swords as an action film; it’s much closer to a new entry in the traditional Chinese wuxia genre that also features some action. It’s very similar to a lot of the early Shaw Brothers pictures in this regard, where the focus was always on the drama over the minutia of the fights, so this can easily derail an action fan looking for ass-kicking fighters to start kicking ass. In this day and age, this has to be a hard film to market, as going this route might win points at an international art film festival, but most Western audiences only want to see Hong Kong action films. 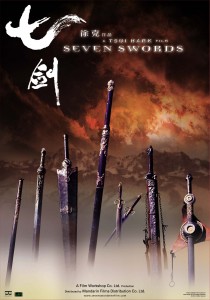 The action that is in the film is pretty good. It seems to get better as the film moves along, with the final battle being absolutely fantastic. Donnie Yen is finally set free and has a great battle with General Fire-Wind that features some of the coolest and impressive wire-work I’ve seen in a while. I was never the biggest fan of wirework in my youth, but as I’ve aged I’ve come to absolutely love it. The final fight is an absolute feast for wire fans, and I’d be remiss not to mention that Lau Kar-Leung, in addition to being in the film, was one of the film’s four action directors. The others were: Stephen Tung, Xiong Xin Xin and Lau Kar-Wing. So yeah, fucking watch this movie.

The acting is uniformly great from the entire cast, and what a cast it is! Donnie Yen is great, of course, but he’s honestly not in the movie all that much. Seven Swords is much more of an ensemble movie without any real main characters, and while Yen is regarded as the top swordsman of the group, he hangs back mostly and lets Lau Kar-Leung lead the way. You’ve also got Leon Lai and Charlie Yeung, adding some 90s HK star power to the bunch, and let’s not forget that Chi Kuan-Chun, star of many 70s Shaw Brothers films including Men from the Monastery, makes a rare appearance here as Dongluo.

But yeah, Lau Kar-Leung! I love him so much and it was his involvement that got me to stop procrastinating and watch this film. After the 90s, Lau pretty much retired from the film business, so anytime he does something it’s cause for celebration. He was responsible for so much of the amazing choreography that helped create and define the martial arts genre at the Shaw Brothers studio and he’s one of my absolute favorites. He was also a fantastic director creating some of the most iconic films the genre has to offer. Little films like The 36th Chamber of Shaolin, Challenge of the Masters or Drunken Master II. He’s also a wonderful screen actor and Seven Swords allows him to give it all one more try. He’s in the movie a lot more than I expected him to be as well.

Seven Swords may start out on a Seven Samurai framework, but it develops into much more than that over the course of the film. I overlooked this one for a long time because I thought it was nothing more than a Chinese re-telling of the tale, but I’m glad I finally watched it. It’s actually more of a Chinese fantasy & swordplay wuxia film and I thoroughly enjoyed it. If you go in with the proper expectations, I think any Tsui Hark fan could get a great time out of this one.