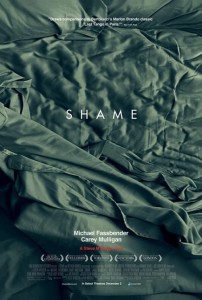 As you might expect, this forces Brandon to stifle his sexual urges which increases his frustration with the situation. This is compounded further when his predatory dumbass of a boss hits it off with his sister and they all go back to Brandon’s apartment. Brandon is unable to relax with the sounds of their copulation seeping through the walls and assaulting him mentally. His sister is clearly comfortable and without shame to do something like this, but that’s selling her character a bit short. She’s actually the opposite to Brandon’s social isolation, a wandering soul in desperate need of emotional connections with others.

If at this point you’re thinking that Shame is not your usual film about addiction, you would be right. It’s a strange one, as it never delves into Brandon’s background, treatment of his addiction, or why he might be acting the way that he is. For me, these unspoken things were perhaps the most compelling facet to Shame. One clue to his motivation comes in the form of Brandon venturing into a gay club and finding his anonymous sex of the moment there, completely out of desperation. Is it possible that Brandon’s shame may not be a symptom of his addiction, but the actual cause of it? Shame has driven many gay men to “act hetero,” so could it be that Brandon’s deeply repressed homosexual desires fuel his intense sexual addiction? We’re not really given any other information to corroborate this theory, but Sissy’s quick line, “We’re not bad people, we just come from a bad place,” suggests that their actions are clearly a result of some kind of trauma or tumultuous upbringing. Both characters deal with their childhood demons in different ways: Brandon withdrawing inside his personal space, and Sissy “acting out” and searching for connection wherever she happens to be.

What dysfunction led this pair of siblings to be as emotionally fucked up as they are? In exploring this question, I can understand why a lot of people find this movie intriguing, myself included. That being said, I can’t deny that for most of the movie I was relatively bored and couldn’t figure out what the point of many of the scenes were. I guess in the end, the film’s ambiguity did make me think, and in that way the film is a success, but it’s not a film that strikes me as something extraordinary. Fassbender and Mulligan definitely pull off a couple of great performances, though. I can also respect McQueen’s solid camerawork and extensive use of lengthy takes throughout the film, enhancing the fly-on-the-wall realism that Shame is built upon, as well as allowing the actors to truly inhabit their characters.

I may not be head-over-heels for Shame, but it’s definitely got its merits for those who are interested in stuff like this. I cannot condone the scene where we are forced to sit through an abysmally long, half-time version of New York, New York sung by Carey Mulligan, though.

Shame is the Large Association of Movie Blogs’s (LAMB) Movie of the Month! Head over to the LAMB site tomorrow for more reviews of the film, as well as the LAMBCast podcast discussing the film!