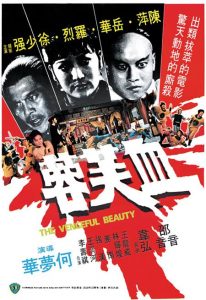 I hesitate to call The Vengeful Beauty a real success, though, as it feels like too much of a step back into the early ’70s wuxia mold than anything truly unique. There’s nothing inherently wrong with that, of course, but it just can’t stand up to the high caliber of films debuting around it. 36th Chamber of Shaolin released about a month earlier, and Snake in the Eagle’s Shadow debuted just 10 days prior to The Vengeful Beauty. Both of those films are landmarks that shaped the industry going forward and remain classics to this day. Flying Guillotine 2 and The Vengeful Beauty released about two months apart, and did roughly the same at the box office (coming in at #66 & #70 respectively), while Chor Yuen’s Clan of Amazons came out between them and ranked at #16. The Vengeful Beauty is a great example of the older style of wuxia, but it’s a film that would undoubtedly play better outside of its temporal context.

The film is relatively well-written and plotted for a film of its ilk, offering Chen Ping a great role to show off her skills. Norman Chu also gets a meaty chance to shine as Ma Sen (essentially the Chen Kuan-Tai main character of The Flying Guillotine), at a time when he was generally relegated to much smaller supporting roles. I don’t necessarily think he has the weight to carry the burden quite yet, but he stars in two of my all-time favorites (Bastard Swordsman and Duel to the Death) so I really enjoyed seeing him so much here. The attempt at a love scene between Chu and Chen Ping doesn’t work well at all, though, mostly because their “romance” showcases some of the worst on-screen kissing I’ve ever seen. Thankfully, Siu Yam-Yam saves this section of the film with her brooding menace.

Tang Chia handled the choreography, so the fights are every bit as competent and exciting as you’ve come to expect. What they aren’t, though, is especially memorable. There are elements that stand out, but highlights within the intricacies of the choreography are rare. The fight on the branches of bamboo trees is fun, even if the illusion isn’t especially convincing. The usage of various weapons is great, too — specifically Chen Ping’s transforming spear and Lo Lieh’s three-section staff — and the variety elevates the fights considerably. Yuen Biao, Yuen Bun, and Corey Yuen were among the film’s stunt team so the extensive use of wider shots within the fights allow us to see the stuntmen’s agile performances, something this film only has because of its late ’70s production time. But the key is that these are all broader aspects that elevate the older style, while the more successful films of the era were delving deeper into the nuts and bolts of the choreography itself. Chor Yuen’s films didn’t, but this is a notable exception, and he makes up the difference by adapting the density of the martial world to the screen.

If you enjoy the older style wuxia, then The Vengeful Beauty is definitely one to watch. Just try to forget what year it came out and enjoy it for what it is.

Next up in this chronological journey through the Shaw Brothers Martial Arts catalog is the non-Shaw box-office smash, Bruce Lee’s Game of Death! See ya then (hopefully soon)!