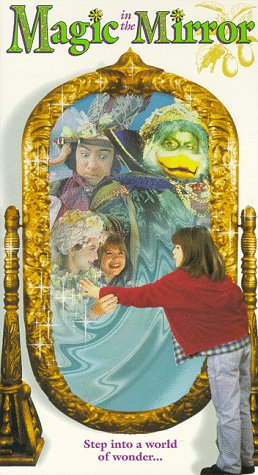 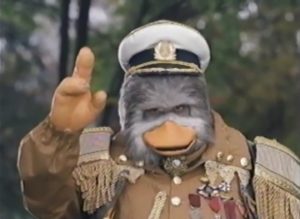 This other world is a strange one indeed; one that could’ve only been dreamed up at the Full Moon studio. It is a land of beautiful rolling hills and exquisitely designed architecture, but it is also a world fraught with danger. Giant duck creatures called Drakes are great connoisseurs of tea, but your run-of-the-mill Lipton ain’t gonna cut it. They prefer their tea fresh and flash-brewed in a gigantic duck-shaped pot designed specifically to boil humans alive. There hasn’t been a human visitor to this world for some time, so they’ve made do by boiling stray mirror minders and whatever else they can get their orange hands on. It is one of these mirror minders, Tanzy (Kevin Wixted), who Mary Margaret meets upon traveling through her great-grandmother’s mirror.

Traveling from one world to another is always a quick way to my heart, and the image of multiple doors on a green field (presumably leading to just as many worlds) instantly brought to mind Stephen King’s Dark Tower series. Magic in the Mirror definitely doesn’t rise to those heights (Dark Tower is one of my favorite things ever), but it manifests its ideas of parallel worlds well enough to entertain. In this case, I don’t think it’s because the world is especially well-realized, it’s more that the characters are. Mary Margaret and her parents follow the classic Moonbeam arc of finding that they need to spend more time together, but they do so in a way that felt unique and charming.

If you love B-Movies and you’re looking for a way to share them with your kids, then I’d say Magic in the Mirror is a solid choice. They won’t get the Apocalypse Now joke, but the idea of being brewed alive for tea should be suitably effective on them. Hahaha 😀

Next time I get around to a Full Moon movie I’ll be watching the Full Moon-related film, 2005’s Deadly End AKA Neighborhood Watch! See ya then!