To be honest, I’m not much of a giallo fan. There are ones that I love (such as The Bird with the Crystal Plumage or Your Vice is a Locked Room and Only I Have the Key), but for the most part I find them boring and hard to get into. In the case of Corpse Mania, I was locked in right from moment one. It runs a lean 81 minutes, and it uses each and every one of them effectively. The mystery is always evolving, and the killer is progressively more daring yet always just out of reach of the police. Perhaps some of the twists should have been more apparent to me, but I was so caught up in the moment-to-moment tension that I rarely had a second to spare for these kinds of speculative thoughts. 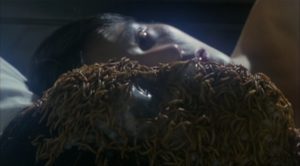 Kuei always had a knack for an interesting shot, but he really outdoes himself in Corpse Mania. A fantastic Steadicam tracking shot establishes a key location in the film, and it’s this sort of modern spirit that sets him apart from the standard Shaw contract director. Kuei’s films were rarely well-received in their time, but they most definitely helped to develop and define the Hong Kong New Wave style. The rich, shining visuals of Corpse Mania make me think that Kuei really poured his heart into this one, though I have no information to back this up other than my own feelings. In the Hong Kong Film Archive book Kuei Chih-Hung: A Rebel in the System, Chen Kuai-Tai described Kuei on the set of 1980’s Killer Constable as “like a maniac,” and that “Kuei demanded realism.” Kuei was a director who knew what he wanted and would work to get it. He never had the studio backing of the bigger name directors, so he really had to fight to craft his films. Corpse Mania was made during this same period, and the result is easily one of his best films. 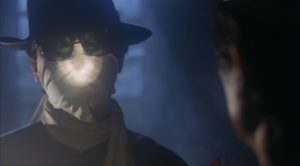 Kuei Chih-Hung has the reputation of being the Shaw schlockmeister, but he was so much more than that. There is no better example of this than Corpse Mania, a film that exhibits his best qualities on both sides of the art/exploitation spectrum. Personally, I prefer his black magic films, but Corpse Mania is a real gem just asking for re-discovery. There’s no reason that the questionably glorified violence of Argento’s Deep Red should be accepted as artful, when similar strokes in Corpse Mania are viewed through a different lens. Highly recommended (although I will say that while I loved it, I’ve briefly looked around and found a lot of middling reviews for this one. So, as always, your experience may vary…).

My annual journey into Shaw Brother horror films is over, so it’s back to the chronological journey through the Shaw Brothers Martial Arts catalog! I’ll be ringing in November with Lau Kar-Leung’s second film, the amazing Challenge of the Masters! See ya then!