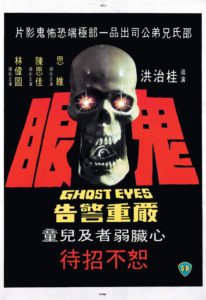 Without giving too much away, Shi doesn’t help Wang out of a genuine desire to be of service; he has his own, very specific goals in mind. The film rolls this out through a well-paced first half that delivers thrills and chills in equal measure. I expected some kind of horrific eye trauma to figure into the plot, but you can relax and rest easy because Ghost Eyes doesn’t really develop in that direction. There is eye trauma of the psychological variety, though, and anyone who wears corrective lenses should be able to commiserate with Wang’s circumstances.

Ghost Eyes runs about 99 minutes, but I must admit that it felt like it lagged in spots. When it’s great it really delivers, but there seemed to be a lot of time between those moments that were either too predictable or too slow-moving. What I did love, though, was the film’s overall structure. The problem is presented, and the characters are forced to deal with the consequences. Later they determine it is too much for them to bear, resorting to hiring a professional to help them. Ultimately, though, it is Wang herself that must step up to the plate and face her fears. There’s a lot of thematic depth that can come from a structure like this, but Kuei doesn’t exactly engage it. This isn’t a bad thing, but I can’t help but think that If Kuei directed Ghost Eyes later in his career, it could have been a much stronger film. Regardless of its various flaws, Ghost Eyes is a dark, cynical tale of the supernatural that still hits rather well.

If you’re looking for a Shaw Brothers horror film to fill your October watchlist, then Ghost Eyes is a great choice, especially if you’ve already exhausted the more well-known offerings in the Shaw catalog. It would also make an excellent addition to 88 Film’s Shaw Brothers Blu-ray lineup, so cross your fingers and hope that they release it!

Next week in my annual journey into Shaw Brother horror films: Chou Hsu-Chiang’s The Bride from Hell! See ya then!