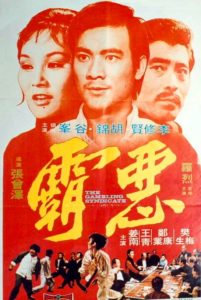 Expectations: High. I loved The Casino, so I’m eager to see what Chang Tseng-Chai has up his sleeve for this one.

Chang Tseng-Chai’s previous gambling film, The Casino, was a gambling drama with a dash of action. The Gambling Syndicate completely flips the equation and delivers an action film with a flavoring of gambling drama. Which film you prefer will be up to the type of movies you like, but each film has its own strengths and weaknesses. Regardless, they are both relentlessly entertaining and full of life.

The Gambling Syndicate begins by introducing us to the film’s casino and the villains who run it. We work through multiple levels of hierarchy in a short amount of time, and for the first 15 minutes or so it really feels like the film will live up to its title by focusing entirely on the villains. But there the film brings in the heroes, and never really returns to explore the syndicate further. This is one of the few strikes against the film, but in a film as quick-moving and fun as The Gambling Syndicate, this kind of flaw doesn’t really amount to much.

So anyway, a bunch of smarmy villains run a casino, led by Chen Tian-Gui (Ku Feng). He’s got a boss, and they’re conspiring with a local police chief, but the main focus of the villainy resides with Chen. Fang Da (Danny Lee) is a detective sent in to dismantle the syndicate, but knowing his own limitations he enlists the support of a pair of convicts, Zhu ‘Nine Hands’ (Cheng Kang-Yeh) and Jin Gang (Fan Mei-Sheng). There’s a few more details here and there, and some complexity reveals itself as the film goes along, but it would betray the film to really delve into those details. Suffice it to say that the story isn’t too deep, but the characters are defined enough to drive the film and entertain with ease. It may not be his best, but The Gambling Syndicate is still working with a Ni Kuang script, so there’s a level of sophistication here that is unseen in lesser Shaw films.

The action exhibits similar shimmers of sophistication thanks to the developing choreography work of Yuen Cheung-Yan and Yuen Woo-Ping. Extended, unbroken shots of the performers trading strikes play very well, even if the overall style is too close to the old-school flailing than the precision of Lau Kar-Leung’s contemporary work. Surrounding props are also brought into the fights on occasion, foreshadowing the complexity and playfulness of later Yuen work and Jackie Chan. Tight footwork and incorporating falls & throws makes the fights a lot more interesting than their older brethren, too. Unfortunately, they do still suffer from a bunch of guys just dancing around in the background to create the illusion of a bigger battle, and this ends up being a bigger distraction than I’d have liked.

The nature of the story hinders the choreography more than anything, though. The story and the relationships between the characters just don’t have the emotional weight to make the fights matter. They are always fun, but we aren’t drawn into a meaningful struggle so it’s more shallowly entertaining than resonant and memorable. Chang Tseng-Chai’s River of Fury is a great example of the opposite being true, and it also features Danny Lee and Ku Feng in its end battle so it works well for comparison.

I also want to note that the Yuens’ love of smashing wooden props returns to their work once again, although they reserve this destruction for the later stages of the film. I also got quite a kick out of Danny Lee smashing a chair and then using the broken legs in his hands to continue beating down opponents for the next few shots. Finally they found something wooden that didn’t immediately shatter upon impact! Hahahahaha! 🙂

I do wonder why Danny Lee continued receiving lead roles over some of the other Shaw actors. He would later come to be a great actor, but at this early stage of his career he’s rather blah and uninteresting, especially as a main protagonist. I have to wonder if it was due to his similar-enough look to Bruce Lee (and his name, too), making this film (and others with Danny Lee as a lead) into something of a more respectable version of Bruceploitation. Who knows… I’m just theorizing here, no real info.

In any case, The Gambling Syndicate is a very entertaining movie. It’s not great, but it does what it does economically and in ways designed to deliver maximum fun. It’s lean, mean and you could definitely do a lot worse when it comes to obscure Shaw Brothers films!

Next up in this chronological journey through the Shaw Brothers Martial Arts catalog is the Water Margin sequel All Men Are Brothers! I can’t wait! See ya then!