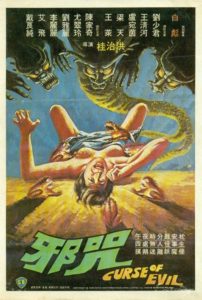 While it seems relatively straightforward to understand written out like this, it’s far from the most elegant way to convey this information. I wonder if this was one of the many unfinished Shaw films that received some re-shoots later to finish it up for release. There are characters that come and go, plot threads that do the same… it sure seems unfocused and sloppy for Kuei Chih-Hung, especially at this point in his career. I mean, this was released in between Bewitched and The Boxer’s Omen, arguably his best work, so something just doesn’t add up.

Looking into this possibility, I found a comment about it on the Cool Ass Cinema post that I referenced in last week’s review, stating that it was started by someone else before Kuei finished it. This is about all the confirmation I need, because it feels true given the film at hand, and Curse of Evil really doesn’t exhibit a lot of the classic Kuei Chih-Hung visual style. But as luck would have it, IMDB actually has a pertinent piece of info about the film! If it is to be believed, then Wong Fung (director of many Wong Fei-Hung films, Rivals of Kung Fu, and a bunch of Shaw comedies) was this film’s original director. Hmm, seems like an odd choice for an over-the-top horror film!

OK, with that out of the way, I can focus on the thing that I absolutely loved about Curse of Evil: the wonderfully twisted and hideous FX work. There wasn’t enough of it to really satiate me, but whenever it came around it really meant business. It’s kind of a shame to spoil the film’s two major supernatural entities, but since this movie is ridiculously rare, I guess I’m merely adding to its infamy. So basically, there’s a bunch of bloody, steel-toothed frogs and a gigantic, man-sized worm thing that is honestly the goopiest thing I’ve ever seen in a movie. When it kills people, it literally leaves their skin chunky and glistening with its thick pink slime. And let’s not just buzz past the BLOODY, STEEL-TOOTHED FROGS! Well, to be honest there’s not much else to them, but what more do you need? No matter how muddled and incoherent this movie can be at times, the promise of these incredibly inventive and weird-as-fuck creatures is more than enough to make this a must-see for horror fans.

I wish Curse of Evil was a better movie overall, but in terms of searing images into my brain, there are few movies that will leave as lasting an impression as Curse of Evil. The core story is pretty good, but it’s told in such an uninvolving way that the movie folds under the weight of its large cast of forgettable characters. But whatever… come for the bloody, steel-toothed frogs and stay for the gigantic man-sized worm thing!

Next week I’m taking a week off, but when I return the Shaw Brothers Chronological series will pick up with the 1974 Chang Cheh film Na Cha the Great! See ya then!