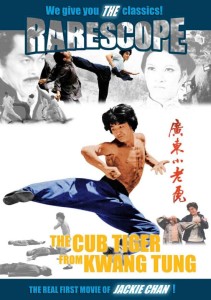 So to cut to the chase: The Cub Tiger from Kwangtung not only features Jackie in his first starring role, it unexpectedly shows glimmers and flashes of the Jackie to be. During the fight sequences, Jackie flips off of tall rocks, quickly tumbles to dodge strikes, and in one fight even uses his surroundings to thwart bad guys. The fights themselves aren’t especially good in the grand scheme of things, but it’s hard not to smile when you’re watching a teenage Jackie Chan jump around a ship’s deck fighting henchmen, all while holding tight onto a rope that controls the fate of his friend hoisted up the mast. As the first film to feature action choreography from Jackie Chan (and Corey Yuen, who worked on the film uncredited), The Cub Tiger from Kwangtung is a much more important and foundational film that I had expected it to be.

Groundwork aside, the film itself is rather mediocre when Jackie Chan isn’t rolling around or fighting someone. The story is really, really thin, amounting to Chen Hung Lieh killing Chan’s father with his “Leg of Doom” technique and then Chan eventually taking revenge. But as far as I could tell, Jackie never knew Chen Hung Lieh killed his father, as his uncle (Tien Feng) never told him. He just raised him and forbade him from fighting with anyone, punishing him cruelly when he does, even when it’s in self-defense. But this is a kung fu movie, so the story isn’t paramount, and this basic framework works well enough to throw Jackie and his sister into a group of fairly fun fights.

Let me go back a bit and ruminate on the year this was produced. 1971. This is coincidentally the year I’m currently on in my Shaw series, and the differences here are interesting. Where the Shaw films are fairly slick and lavishly produced, this is a decidedly more low-budget affair, but the martial skill of Jackie Chan far outweighs anything I’ve seen yet in the Shaw series. Just about every time someone jumps in a Shaw movie, it’s aided by a trampoline (or in extreme cases, a shot played in reverse), but here Jackie effortlessly jumps, flips and kicks his way around the screen. The realism contained in those actions makes them feel so much more natural than the ones in the Shaw films. Where most Shaw films like to feature at least some element of the supernatural side of kung fu (most Shaw films were basically still wuxia at that point), the focus on realism here results in an incredibly different feel. Ultimately, Jackie Chan isn’t a commanding enough screen presence yet, but his athletic ability and the fight choreography feel like they’re only hindered by his imagination. The Shaw films had yet to really embrace the idea that martial artists strutting and showing what they can do could carry a whole movie, and it’s interesting to see that independent films were already trying to do it.

The editing between scenes is also frequently great, bridging scenes with similar images, or even faking you out to think something else happened when really the scene had shifted. Director Ngai Hoi-Fung never really made it big, but the film at hand was much more competently made than some reviews had led me to believe. He did later go on to make the Bruce Leung classic, Ten Tigers of Shaolin, so if nothing else he gave to world a couple of good ones.

The Cub Tiger from Kwangtung is definitely more a curiosity piece than first-rate filmmaking, but anyone highly interested in Jackie Chan and his foundations will find a film that offers a great look into his youth. Not only does it features fights with glimmers of future greatness, Jackie’s athleticism and acrobatic ability are front and center throughout every fight he’s in, making this much more of a Jackie Chan film than I had expected. And it features one of the best kicks to the balls I’ve ever seen, so get ready to wince boys. The Cub Tiger from Kwangtung is recommended to the JC hardcore, all others should hold out for a later film.

And for those wondering, I do plan on watching Master with Cracked Fingers for comparison at some point.

Next up in this chronological journey through the films of Jackie Chan: 1976’s New Fist of Fury, his first starring role with director Lo Wei! Also I’m looking at doing one Jackie every two weeks, unless I can figure out a way to do more (which is definitely possible). But it’s a little tough for me to balance this and the Shaw series. Anyway, just so ya know!