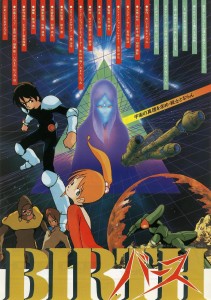 We do find out as we go that there is an alien race called inorganics that are apparently some kind of robots who hate all organic life, and that the spiffy magic space sword is supposed to destroy them. Or something. But it’s not until halfway through the film that the characters get an actual objective. The old space merchant recalled his days in the army. Back then they were building a super weapon to fight off the inorganics, but the place got blown to hell in the war. He thinks the super weapon might still be there, so the gang takes off to the ruined military base to try and find it, then sell it to the military who will probably pay good money to get it back. From then on out, they just get chased around by bigger, nastier inorganics until the end of the film. That’s about all there is. If you want a story, you’ll have to look elsewhere.

And it has a weird, confusing, metaphysical ending to rival anything from Gainax. In fact, it constantly reminded me of the short Daicon films that the founders of Gainax had made in early ’80s. It has the same feel of, “Let’s just do this because it’s cool,” that those old Daicon shorts have. This is a movie about having a whole lot of silly fun. Coming into Birth with any other attitude would be a huge mistake. 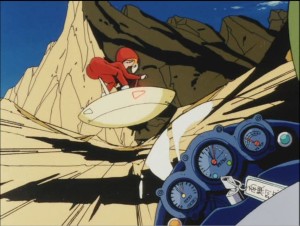 The film is very well-directed, and every scene is imbued with an energy and intensity which is hard to match. Everything is dynamic and creative, rarely using the same camera angles or perspectives. Each shot brings a new technique to the table. I get the feeling that the whole film was one massive experiment with the camera in anime to see what would or could work. This leads to a lot of difficult to animate shots that come out looking fantastic.

This is oddly contradictory to the shoddy production. Some of this is simply that this is a film from 1984, and there wasn’t any fancy computer assistance that later anime enjoyed. But some of it is just clumsy. It is clearly made by very talented people who apparently just didn’t bother to do a final cleanup and polish. The sound department gets the biggest grief. Lip syncing for the voices is abysmal, even to the point where the wrong character is moving their mouth during the dialog. There’s also a scene of the spaceship interior exploding, and the sound effects were apparently flat-out forgotten. It’s easy to think of the final scene as a mistake as well. It features two women talking, but there are no voices to go with them. Supposedly this was a deliberate artistic choice, but the clumsy sound department leaves one wondering. This is also oddly contradictory with the fact that Joe Hisaishi of Studio Ghibli fame composed the soundtrack, and did a perfectly fine job with it. 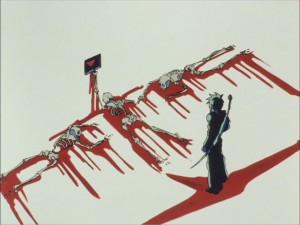 The film is also filled with a kooky upbeat sense of humor. I love that anime is so good at blending more serious events with a humorous tone, and Birth excels at this. The film is so entertaining because these endless chase scenes aren’t intense; they’re uninhibited fun. From the inorganic that bellows the names of various vegetables as it attacks (just imagine Ryu from Street Fighter shouting “Watermelon!” whenever he throws a fireball) to the foreground shot of a pair of skeletons who clearly died while in the throes of passionate sex, Birth is full of unexpected lunacy that kept sending me into fits of laughter.

The film can certainly drag by the end, though. As much as it is always fresh and unique, the core premise of an endless chase scene does get rather old after a while. Even I was starting to get a little tired of it, despite how much fun the movie is. It’s a great forgotten title, though, well worth checking out for anyone who likes action-packed comedy anime.