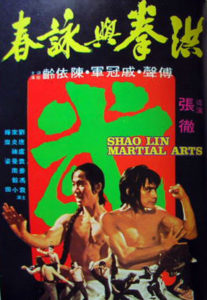 Shaolin Martial Arts is filled with undeniably charismatic characters, but we know almost nothing about them. I don’t know any of their names, and I doubt their names were even mentioned more than a couple of times; even Fu Sheng’s relentless charisma is muted considerably! Yet I could easily tell you all the martial styles used by these characters. Most of the film’s dialogue reflect this as well, generally dealing with the struggle between the Shaolin and Manchu students, or to the training in specific techniques required to defeat the Manchus. This approach might make Shaolin Martial Arts sound cold, but in fact it elicits deep, heartfelt emotional responses, even more so than a lot of traditionally structured kung fu films. By structuring the script and its characters in this way, Chang Cheh and Ni Kuang have refocused the kung fu film away from traditional drama and revenge; Shaolin Martial Arts is about the relationships between master and student, between the martial artist and his art, but perhaps most importantly, between the past and the present. If we broaden this line of thinking out a bit, the filmmakers are essentially recreating this master/student dynamic in presenting the film to the audience.

The Hung Gar style was originated by Hung Hsi-Kuan (played by Chen Kuan-Tai in the previous films), who then passed it down to others who did the same, and so on, all the way until it was taught to Lau Kar-Leung by his father Lau Cham (who learned it from Lam Sai-wing, a student of Wong Fei-Hung). Knowing this, it’s easy to understand Lau Kar-Leung’s ambition to bring real martial arts and its philosophy to the screen. To study kung fu is to confront how easily lost and impermanent it is (or could be). With Shaolin Martial Arts (and many of his other films, as a choreographer and later a director), Lau has effectively passed down this broad knowledge of Shaolin and its martial arts to the viewers. We don’t know the actual techniques, of course, but we’re aware of them and if nothing else, we keep their memory alive. I’m aware that it sounds odd to suggest that I know anything concrete about Eagle Claw by watching a movie, but the increased global popularity of martial arts over the 42 years (and counting) since the release of this film speaks for itself, and the proliferation of martial arts films in the mold established primarily by Chang Cheh and Lau Kar-Leung are an undeniable part of that rise.

This structural style also lays out the future of kung fu movie plots in one fell swoop. School vs. School, the villain with an unbeatable technique destroying the hero’s friends/family, and the hero training in a new style that will allow him to beat the previously invincible villain. Certainly the elements existed in previous wuxia and kung fu films, but the ideas in Shaolin Martial Arts are distilled down to their core. All extraneous material has been stripped away; what will later be laughed at by Western fans as “your standard, barebones kung fu plot” is in fact a revolution in the genre by the very filmmakers who shaped the genre into what we now know it as. The simplicity and the power of the storytelling in Shaolin Martial Arts is astounding, visual, and highly relatable. Watching this film in context along with its contemporaries, it stands out as the truly different and special film it is.

The film works so well with its broadly drawn characters because of their relatability. The Shaolin heroes are not the badass folk legends we’ve come to know in the last two films. These students are a new crop in need of guidance and training. Regardless of their naivety, their moment to stand tall has arrived. The few surviving students represent the only inheritors of the Shaolin legacy, and it is their job to do it justice and eventually pass it down to the next generation. Even the styles the Shaolin students learn are described as techniques that have dwindled down to just a single practitioner, a master living in the woods. If these kids can’t learn them and survive, the arts will cease to be within a matter of years. They aren’t just fighting for their lives or the honor of their school, they fight for everyone that has come before them and the collective knowledge of that lineage. In the absence of defined, traditional characters, the importance of preserving the knowledge of the past, without which we could not continue to build towards the future, rises to the top. The Shaolin school is defined by its perseverance of spirit, and its ability to overcome insurmountable odds through passion and loyalty (which could also describe the basic human desire to survive). In a similar way, I can imagine that many Chinese people feel similarly about their culture, since there are written records of its consistent existence going back at least 4,000 years!

The choreography in the film is nothing short of perfect. It’s beautiful, electric, intricate and highly complex. It never looks dated or slow in any way, either. I was taken on a journey of discovery that gave me a martial high equivalent to what I imagine it must be like to scale Mount Everest. The work here by Lau Kar-Leung and Tang Chia ups the game considerably for future films; it is truly stellar. There’s also a lot of choreography devoted to martial displays of practicing and training techniques, giving a much different feel than the general fighting usage of martial arts in previous films. Any fan can tell you that training sequences are one of the treasured hallmarks of the genre, but they actually aren’t in most of the films I’ve reviewed so far in this chronological series. Oddly enough, the German co-production Virgins of the Seven Seas probably had the most training of any previous film. The training of Shaolin Martial Arts highlights the countless hours of hard work and dedication that goes into learning a martial art, while Lau Kar-Wing’s cameo display of skill with the guandao reinforces the film’s themes of the impermanence of martial knowledge.

Shaolin Martial Arts also speaks to the never-ending pursuit of the martial arts. Like understanding your own brain, it is an ongoing and shifting exercise; no matter how much time and effort you put in, there is always more to be learned. As a character says in the film, “There’s always someone better,” and as such there will always be a reason to strive and continue to train. Not that martial arts should be competitive, just that you should always be open to learning more, no matter how much you already know. This point is expertly communicated to us through the Wing Chun master played by Fung Ngai. Chi Kuan-Chun celebrates because he has finally achieved his goal after over a month of training, but instead of praise, his master greets him with the next level and a quiet “You have a long way to go.” We celebrate with Chi’s character, but we are also crushed right along with him in this moment.

Artistically, there’s nothing like Shaolin Martial Arts in Chang Cheh’s previous work. It is another in a long line of genre-defining films from the leading director of the Shaw Studios. Chang Cheh is one of the great treasures of world cinema, and his passion for storytelling and his artistic drive for fresh, new experiences brought the genre to this place (and even further as time would pass). But without the partnership and working relationship with Lau Kar-Leung (which would fizzle out in 1975 while filming Marco Polo, resulting in Lau’s pursuit of his own directorial career) none of this would have been possible. Chang desired artistic expression and evolution, and Lau held the martial knowledge and the desire necessary to share it with the public.

Shaolin Martial Arts is instantly one of my favorite Shaw Brothers films, as well as one of the best pieces of work from Chang Cheh in my opinion. Brilliant stuff. Watch it!

And it’s streaming on Netflix, Hulu, iTunes, Amazon… so you have less excuses!

If you still need convincing, maybe you’ll want to see this because Tarantino totally lifted the one-inch finger strike sequence and the following “I can’t hold my chopsticks” dinner scene from Shaolin Martial Arts, restructuring it for The Bride’s training with Pai Mei in Kill Bill 2. There may have been other stuff, too, but honestly I was so drawn into this film that I didn’t notice anything else. Whatever, watch a true martial arts film like Shaolin Martial Arts!

Next up in this chronological journey through the Shaw Brothers Martial Arts catalog is the Hong Kong/Italy co-production from director Bitto Albertini: Supermen Against the Orient! See ya then!