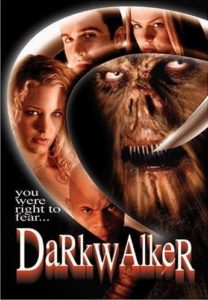 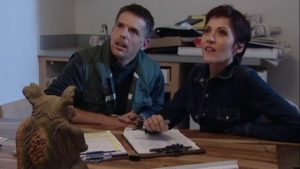 Now that we know what the stakes are, the film transports us into the modern day, where the land is being developed into Hobb’s Grove, the haunted Halloween attraction. This is actually a real place near Fresno, CA, and the film shot some (or all) of its footage there. Some of the actors were apparently employees of the place, too! Anyway, back to the movie. It’s almost Halloween, so the owner’s of Hobb’s Grove are hiring a group of seasonal employees to get the place ready for the big night. Of course, as a horror movie, their season will be much shorter than they expect!

This setup is pretty classic slasher territory, but as I mentioned before, the lack of inventive kills/gore, and shooting on video, makes it feel too much like an amateur film than anything that even remotely recalls the good ol’ heyday of the slashin’ early ’80s. There’s nothing inherently wrong with this, but if the setup whets your appetite, it probably won’t be satiated by what Dark Walker actually delivers. If nothing else, at least the Dark Walker himself is fun. 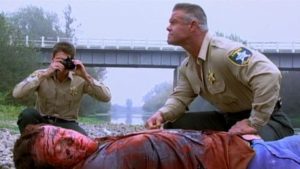 Unlike the plodding, unrelenting Jason, the Dark Walker is like a raging storm. His desire to kill his victims is as old as the earth he protects, and he pursues his prey with a furious energy. At one point, he explodes through a door with his rage level jacked all the way up to apeshit, smashing and crashing through anything in his path. For such an ancient evil, he must spend his off hours doing a lot of cardio. I loved this guy, and I wish the movie around him was better. If this was made in the ’80s (and thus shot on film, presumably with more gore), this would have had all the right elements in place to make for a real cult classic.

Proving my point further, Dark Walker also contains a fair amount of comedy, a well-used ingredient in the ’80s horror film. For me, these touches were mostly effective, too! That’s always a bonus. I really enjoyed the guy who lovingly oiled his chainsaw and named it Betty, but my favorite was the Sheriff (Brad Potts) who posed for photos with the Dark Walker’s victims in hopes of fulfilling his dream of appearing inside one of his favorite publications — Black Belt or a true crime magazine. Potts has shown up in a couple of more recent Full Moon movies, and I always enjoy his characters and performances of them. 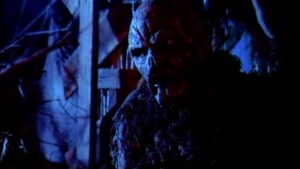 All of these good qualities caused me to be more disappointed with Dark Walker than I normally would be, because I could see the potential for a better movie peaking around the edges. If only they had some more money to sink into this movie that very few people have probably ever seen! It’s not all budget issues, though, as the story’s mystery and conclusion were far less exciting and engaging than I would have liked them to be. For all the problems, though, this is easily my 2nd favorite Danny Draven movie. Nothing has come close to topping the ridiculous fun of Horrorvision.

I’ll leave you with a couple of great lines from the movie’s goth character:

Next time I get around to a Full Moon movie I’ll be watching the 1995 Moonbeam movie Magic Island, from director Sam Irvin. See ya then!