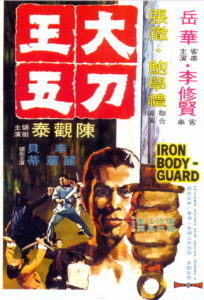 Continuing Chang Cheh’s then-recent trend of dramatizing the life of a Chinese folk hero, Iron Bodyguard is set around the Hundred Days’ Reform, a political movement in 1898 by the Guangxu Emperor and his supporters that attempted to mend the problems of the Qing Dynasty from within. Our hero is Wang Wu (Chen Kuan-Tai) AKA Broadsword Wang Wu or Great Sword Wang Wu because of his use of the dadao, a Chinese broadsword. Wang is a truly good man, looking out for others and doing his best to help the disenfranchised and less fortunate at every opportunity. Through a lengthy series of events too long to explain, he becomes friends with Tan Si-Tong (Yueh Hua), one of the emperor’s supporters who would eventually go down in history as one of the “Six gentlemen of the Hundred Days’ Reform.”

Part of the problem with Iron Bodyguard is that it takes half the movie to arrive at the main drive of the tale: the reform. The first half introduces the film’s main characters and brings them together naturally to allow for the reform to happen, but it does so without thinking too much about the audience’s experience. While the movie is set amidst a very real and well-documented time in Chinese history, it never once tells the audience this, so if you’re like me and you don’t know your Chinese history it would be easy to take this as merely a fictional tale. Knowing it’s a true story gives it a greater impact and power, so I’m at a loss as to why they wouldn’t have noted this. Perhaps with this knowledge a re-watch will play better, but for now, the first half seemed awfully aimless and without any real sense of urgency. Moments in this section do get referenced for dramatic effect later in the film, and this definitely pulled at my heroic bloodshed-loving heart, so I guess it was ultimately worth it to see how the foundation was laid for the later events instead of just jumping into the main fray.

With the drama aspect coming up a bit flat, kung fu fans might naturally expect the martial arts to fill the void. Not so in Iron Bodyguard, as the film only features a few short bursts of martial arts, until it finally lets loose much later in the film. I wish I could tell you that once Chang Cheh and/or Pao Hsueh-Li unleash the choreography wizards Tang Chia and Lau Kar-Leung that the film magically turns into a diamond… but it really doesn’t. That’s perhaps more disappointing that anything in the film, but don’t get me wrong, the choreography is tight and there are moments to admire throughout.

Besides the nostalgic return of the slow-mo “Hero Getting Mutilated™” Chang Cheh battles, the finale contains an intriguing and unexpected switch to the standard duel to the death that usually ends these things. Wang Wu finds himself against two men, one of whom is a martial arts master, the other is unskilled but he is the object of Wang’s anger. Wang Wu manages to hang onto this man, while also fighting off the master. His attention never wavers from the unskilled man, to the point of punching and kicking the master with the same nonchalance given to brushing something off your shirt. It’s unlike any fight I’ve seen yet in this chronological review series, and the balance between intensity and playfulness feels like a precursor to the directorial career of Lau Kar-Leung and those that followed his lineage such as Jackie Chan and Sammo Hung.

In spite of the problems, Iron Bodyguard is still an entertaining and interesting slice of Chinese history in martial arts drama form. There are definitely worse ways to learn history! And apparently Sammo Hung made a version of this tale in 1993 under the title Blade of Fury, so if Iron Bodyguard didn’t wow you but you like the story, maybe give that one a shot. I haven’t seen it yet myself, but it’s directed by Sammo in 1993, it’s gotta be pretty good, no?

Next up in this chronological journey through the Shaw Brothers Martial Arts catalog is the final 1973 film in the series: Heroes of Sung from director Shen Chiang! See ya then!