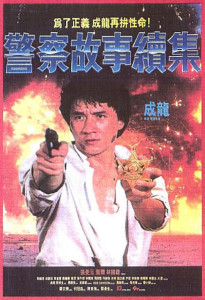 I understand that saying a Jackie Chan movie has a poor script is kind of ridiculous, but this one feels more padded and pointless than his other films of the era, especially coming directly after the very tightly plotted Project A 2 and the slam-bang Dragons Forever. Despite this, Police Story 2 remains an ’80s classic thanks to its incredible stunts and action work, but I think it’s important to acknowledge that it’s also a pretty flawed movie overall. For example, 1988 also gave us Die Hard, a perfect action film with a great script. Without question, Jackie’s film blows it out of the water in terms of the quality and the realism of the action, but no one is ever going to argue that Police Story 2 is the better movie. Well, it’s the Internet so there’s probably someone out there that actually would argue that, but hopefully you get my point.

In my review of Police Story, I wrote a bit about how being familiar with the term “Supercop” influenced my viewing experience. The sequel hits similar beats where Jackie (and his bosses) must deal with his impulsiveness, but in this one his abilities as a Supercop are also counted on and expected of him. They demote him to traffic at the beginning of the film, attempting to bring him back down to Earth, but when there’s a bomb scare in a shopping mall, the average cops turn to Jackie for assistance. Good thing he just so happened to be there while off-duty! Jackie proves himself as a voice of reason, using the previously unseen Supercop skill of calm leadership and confident decision making as he advises the cops on how to handle the situation. This, of course, leads to Jackie being asked to take on the big case, because who else is badass enough to do it? The following two sequels are more and more James Bond-like, and you can see the seeds of that here as well. There’s shades of the superhero genre, too, with Jackie unable to hold a normal relationship because of the responsibilities and dangers that his abilities bring.

The action is a good evolution from the original film, with a lot more glass getting broken and a new minor focus on extreme explosions (both very big and very small). The hand-to-hand work is a lot more environment based, as well, with Jackie using any and everything around him to thwart his attackers. The previously mentioned playground fight is the film’s highlight for me, but all the action is exceptionally done. The finale in an abandoned industrial warehouse is especially well-constructed and staged, with JC stunt team member Benny Lai getting a wonderful chance to show off his kicking skills in his role as the mute.

Police Story 2 is a no-brainer for fans of the original, but despite being more polished and visually sophisticated it just doesn’t capture the same raw energy of the original. That being said: It’s Jackie Chan, it’s the late ’80s, and it’s some of the best action and stunts you’re ever going to see on-screen. At some point the quality of a work is so high that you overlook flaws, and the action of Police Story 2 is definitely of that kind of quality.

Next up in this chronological journey through the films of Jackie Chan is the one he considers his favorite (and the only classic JC movie I’ve never seen!): Mr. Canton and the Lady Rose AKA Miracles! See ya then!