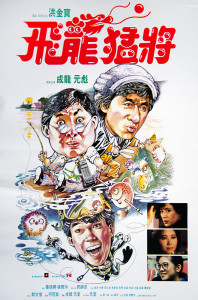 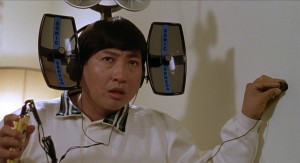 The film’s story builds towards them coming around and fighting on the right side of the issue, but that build isn’t so much an earned build as it is a “just because” jump. As an audience member and fan, I want to see them come around, I just don’t see this film working as a total package for anyone outside the circle of well-seasoned fans that the film seems to be crafted for and directly aimed at. Hell, I wouldn’t even say it works as a total package for me, but while I forgive because I love them, I imagine a general audience member wouldn’t be so kind. The jump between disingenuous wooing and “No, I’m actually in love with you” is seriously covered in the space of a cut, although to be fair during that disingenuous wooing the boys (Jackie and Sammo) do look like they are enjoying themselves. I took it as them acting that way to get their way, but perhaps they were merely disarmed by the ladies. 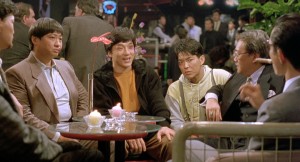 This reveals that Dragons Forever is really built upon the goodwill of their fans, even more evidence that the film was conceived as a victory lap. The cinematic version of “One more for the road,” Dragons Forever sends the brothers off into the sunset having saved the day and come together despite their differences. Even if they didn’t have off-screen creative differences that drove them apart, I’m not sure what else they could have done in another movie, other than more of the same. It would seem that the one thing they could agree on was that “more of the same” was something they weren’t interested in pursuing.

The story is definitely lacking a bit, but the action exceeds expectations. It is always spectacular, and is arguably the best overall work the brothers ever did together. I definitely prefer the Wheels on Meals Jackie/Benny the Jet fight, but the combo of stunts and sustained, bone-crunching action in the finale of Dragons Forever is built to showcase the abilities of just about everyone in the Sammo and Jackie stunt teams, Yueh Wah, Benny the Jet and, of course, all three brothers. It’s truly captivating. The experience of watching Dragons Forever is a joyous one for me, reminding me of everything that made me fall in love with Jackie, Sammo and Yuen Biao all those years ago. It may be a victory lap, but it’s a victory lap at the height of their careers that showcases exactly why they ruled the Hong Kong box office in those days.

Sammo has some amazing moments, and Jackie is Jackie, but it was Yuen Biao’s contribution that really stood out to me this time around. His athleticism and acrobatic ability is at the forefront, with even the smallest moments crafted to show off his skills. But honestly I kind of expect that from him, and as awesome as it is, I was really taken by his comedic acting as a man with only a loose grip on reality. For me this performance really elevates the entirety of the film, acting as the glue holding everything together. Does that make sense? I don’t know, but I loved it. The dynamics between the three brothers (and their characters) is perfect in Dragons Forever; yet another reason to bow out after this one. 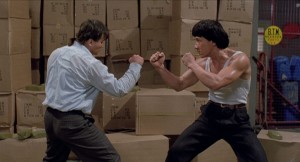 In terms of Jackie’s filmography, Dragons Forever does represent a bit of a step back into the past. He directed his last three films prior to this (Police Story, Armour of God, Project A II) and within them he solidified and perfected what constitutes the classic Jackie Chan film. Dragons Forever brings the action back down to more human levels, and while initially it may seem like this is a bad thing for Jackie, I actually feel like he grew a lot within the more limited structure of the fights in this film. The fight on the boat is a true highlight of his career for me; I’ve always loved it for its confined and truly amazing stuntwork (like the falling back on the ladder moment). Sure, the Project A clock tower fall is fantastic and amazing, but the careful construction of the choreography in this boat fight is much more complex and impressive from a creative standpoint. The daredevil stuff can only go so far, he’s not going to jump off taller and taller buildings, but the invention within fight choreography is almost endless. If it wasn’t, people obsessed with the martial arts genre wouldn’t have anything to be obsessed about!

If you’re new to Jackie Chan, I wouldn’t start with Dragons Forever, but if you’re a tried-and-true fan and you haven’t already seen it… what are you doing? Dragons Forever is an absolute must for anyone who loves Jackie, Sammo, and Yuen Biao! Also watch out for cameos from such Hong Kong legends as James Tin Jun, Wu Ma and Lo Lieh!

Next up in this chronological journey through the films of Jackie Chan is Police Story Part II! Oh yeah, can’t wait to see that playground fight again! See ya then!