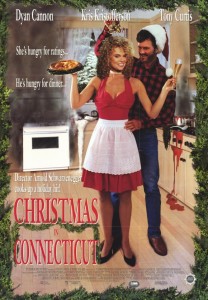 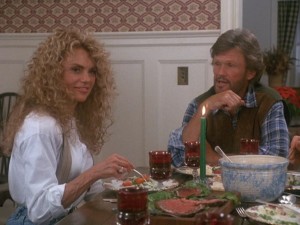 One of the greatest mysteries of the Arnold filmography is how he came to direct Christmas in Connecticut, a TV movie made for TNT (that inexplicably premiered in April!). I don’t have any answers, and for once I’m at a loss to even dream up a reason. He made the film at the height of his career, too; it was his project following Terminator 2: Judgement Day. Perhaps it was done as a favor to Arnold, who perhaps always loved the 1945 original Christmas in Connecticut and wanted to direct his own version of it? No, I doubt Arnold was the genesis of the project, but we may never know. I don’t have his auto-biography handy either, but a search of the index on Amazon shows no mention of the film, so I’m of the mind that this is something Arnold would rather forget.

General consensus seems to concur with my assumption of what Arnold thinks, but I honestly liked the movie quite a bit. It’s not very good, and it is kind of abrasively loud a lot of the time, but its heart is in the right place. It is a Christmas film, after all, so you can’t watch it with a closed heart and a questioning scowl and expect to extract much entertainment out of it. That being said, it’s not a standard Christmas movie by any stretch of the imagination. The scenes designed to pull those Christmas heartstrings are there, but they are far outshined by the over-the-top chaos that inhabits a good portion of the film. Within this chaos, a lot of comedy is created. Sometimes it works as intended (like the ending when Elizabeth goes off the script), but the majority of it probably worked for me because I like B-Movies and offbeat humor. Would “normal” people laugh at the method-actor boyfriend staying in his serial killer role? I don’t know, but I know that I did, specifically because it was so strange and unexpected. I also wonder if the broadness and the exaggeration is rooted in the original film, as that kind of thing was more prevalent in the ’40s than it was in the ’90s. 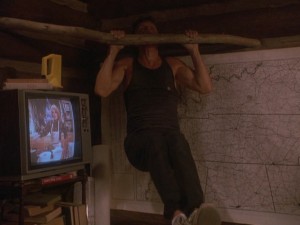 Christmas in Connecticut is not all weird laughs and chaos, though, it actually made me think pretty hard on the nature of reality and how we choose to live our lives. The film opens with Jefferson Jones exercising in his Colorado cabin. Before the camera slowly moves to show this, we are shown the entirety of the cabin and we hear him grunting off-screen. It’s unclear what the sound signifies; its nature could be sexual, a fight, a robust search for a contact lens, who knows. Anyway, my point is that with the information we’re given in these opening moments, we are unable to be completely sure of what the situation is. This is basically the whole film in a nutshell, but as it goes on and we’re fed more and more information, the characters are the ones left somewhat in the dark.

As the opening continues past Jefferson pumping up, it juxtaposes his life against that of our other main character, Elizabeth. Jefferson’s life is defined by its reality and the daily struggle of living in the wilderness. He is alone, completely self-sufficient and also completely selfless. When he gets the call that a kid is lost in a blizzard, he heads out and survives for almost a week without food while rescuing him. Meanwhile, Elizabeth sells an image to her TV audience while she is actually unable to do anything she claims. She lives alone in pure indulgence, frivolously buying a figurine (for the insane amount of $2500) and eating food prepared for her by her maid.

Maybe this juxtaposition of their lives is heavy-handed, hitting everyone over the head with how completely opposite the two characters are, but nonetheless it made me think about how we present ourselves to the world, and how the things that might seem to matter are really meaningless distractions from the truth. What is real, and what is artificial in our own lives? How would our lives look if projected onto a movie screen? I elaborate on this not because I think Christmas in Connecticut is an underrated movie, or that Arnold is actually an unsung auteur, but that a movie is just as much about what you bring to it as it is what the filmmakers put into it. This is why I love watching movies of all levels of quality, because they all offer something different if you’re open to the idea. 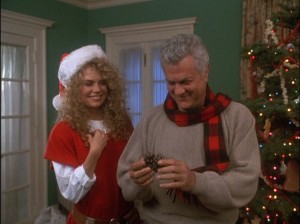 While I was writing the above, I think I may have stumbled upon why Arnold chose this project to make his feature directing debut. If you look at his entire career, it’s filled with all kinds of incredulous dreams that must have seemed impossible to everyone but Arnold. He began bodybuilding at 15, going on to become one of the most successful contenders the sport has ever seen. Through his childhood love of Reg Park, he also dreamed of becoming an actor in American films, despite not really speaking much English at all… and he totally did it! He married a Kennedy, virtual American royalty, and even rose to become the governor of California! Arnold is all about dreaming big and achieving it, so why would he direct something “easy” for him to succeed in, like an action movie? Instead, he tried his hand at a remake of a beloved romantic comedy, because he’s Arnold! He doesn’t take the easy route! I doubt I’ll ever know for sure, but for now this seems pretty plausible to me.

Christmas in Connecticut is a film that I imagine most people wouldn’t enjoy, but what can I say, I liked it. Arnold’s direction leaves something to be desired, though, specifically in his boring and often poorly framed shots. He did manage to squeeze a gleefully over-the-top performance from Tony Curtis, and Dyan Cannon is wonderful, especially as the film moves towards its conclusion. I don’t necessarily recommend it, because I don’t know who would really be a good audience for this, but if you’re into ’90s TV movies there are probably worse ones out there than this!

Next up in this chronological journey through the films of Arnold Schwarzenegger, I’ll be revisiting Terminator 3: Rise of the Machines! See ya then!