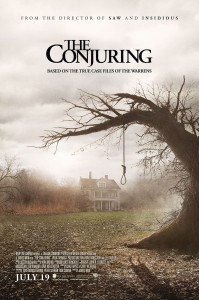 While it does do this, these ghost hunting aspects feel pandering to the modern audience obsessed with countless similar UV-light and video camera reality shows on TV. But even this aspect pales in comparison to what I feel is the film’s biggest fault: its inability to commit. The film starts as haunted house tale, similar to The Amityville Horror. Strange things are happening around the house, and it’s clearly some malevolent spirit at work. After some reveals, the film decides that the haunted house thing is boring so it turns into something derivative of The Exorcist. Along the way there’s also fringe references to The Birds and Poltergeist, and a few others I’m sure I missed. It all works if we’re involved with the movie’s logic, but it feels chaotic and unfocused if we’re not. The Conjuring throws a lot at the viewer, but quality is almost always better than quantity.

I can’t argue that the film isn’t entertaining — it most definitely is — but as a horror film I’m left with such a sour taste in my mouth. To me, the horror genre was always outsider art, something too deviant for the mainstream to ever truly get behind. Sure, there were major studio horror films such as The Exorcist or The Shining, but these films exist as anomalies amidst the sea of low-budget and most often independent horror films. The Conjuring is just as slick as you’d expect a 2013 studio film to be, so its haunted world was never convincing to me. There was never an air of raw power or believability to The Conjuring, it always feels like a slick Hollywood movie. To me slick does not equal scary, unsettling or creepy, no matter how many standard horror tropes are thrown at the screen.

I wish I could say that The Conjuring was great, but that would be a lie. As a mainstream horror film I suppose it’s good enough (it’s certainly a better experience than the new Evil Dead was), but as a horror film in the grand scheme of things, The Conjuring is as ethereal and insubstantial as the spirits the paranormal investigators within try to capture on film.