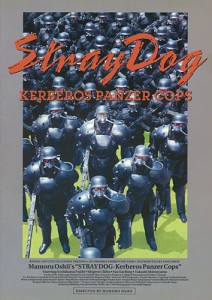 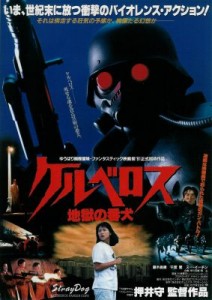 Whatever the cause, the men of Kerberos are battered and near the end of their rebellion. Their commander Koichi abandons the battle, leaving the rest of the men stranded to face the consequences. Three years later, one of those men named Inui is released from prison. He immediately begins a search for Koichi, though he is unsure whether he wants vengeance or just answers. White Spy shows up and gives Inui a tip. Koichi was last seen with a woman named Tang Mie. When Inui tracks her down he discovers that Koichi pulled a fast one on her as well and left again. She wants to find Koichi desperately enough that she sells her condo to finance the expedition with Inui as her partner.

So now the chase is on. Unfortunately, it’s not going very fast. This is a fine enough setup for a good spy thriller, tracking clues and digging for new leads, but we only get scenes of the characters wandering from place to place without explanation. Perhaps this could have worked as a character piece, delving into the relationship between Inui and Tang Mie. It doesn’t go that route either, though. The two leads almost never even speak, to each other or anyone else. They don’t interact; they merely coexist. White Spy is following them of course, but he’s doing so from a distance and being sneaky, so he doesn’t have anything to add to the characterization either. All we get is a half-hour montage of the characters wandering around aimlessly. Man, 10 minutes would have been excessive; this is just overkill. Every time the camera gives a dramatic sweeping view of a building, you think they’ve finally found something important, but then it will simply cut away to another random location and keep on meandering.

Boredom set in quickly, but after a while it transcended boredom. Random pointless objects get close attention only to be immediately forgotten. Incredibly long single shots would give way to strange and evocative cuts to different scenes. The oddest of these involved spinning the camera around in a circular motion, aiming higher up with each rotation until it looked into the sky and then cut away to the next scene. There is almost no dialog anywhere, and what little there is becomes impossible to orient. Is this a flashback? A hallucination? Narration? Is this a literal event or just allusion? After a while I began questioning reality itself, and it suddenly occurred to me that this film must have created philosophy. Now logic should have told me that philosophy has been around thousands of years before movies were invented, but at that point I think my grasp of time as a linear series of events was eroding. If it had gone on any longer I think I would have wound up in some Zen trance, maybe even achieved enlightenment and became the next Buddha. 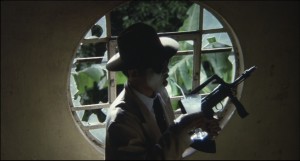 About halfway through the film they finally catch up to Koichi in an absurdly campy chase scene that had me howling with laughter out of sheer bewilderment. The film finally starts to show some personality here, and it is definitely goofy. The rest of the movie is scattered with odd camp moments that come out of nowhere. Sure I laughed at them, but it was mostly a strange “What the hell is going on?” kind of laughter. By far, the best of these moments is when the bad guys get bored with guard duty and they all take a quick martini break while one of them plays a violin.

So now the big secret is out. There actually are bad guys in this movie. They don’t show up until the last half hour, but they do exist, and it definitely improves what little remains of the film. Until they show up we’re stuck with confused and meaningless scenes of the characters sitting around without doing anything, so any degree of action was very welcome. Despite finding Koichi, the second half of the film is only slightly more involved than the first half, going at a tortoise’s pace instead of a snail’s. There is some strange subplot, although I hesitate to even use that word for it, involving red rubber balls. I can only suppose that this has some symbolic meaning, possibly referring to dogs playing catch. Maybe I’m just an ignoramus who can’t understand the deep meaning and artistic finesse of this film, but even if that’s true it doesn’t change the fact that this movie was boring as hell.

There’s only one real action scene in the movie aside from a few moments of campy hijinks, but at least that one scene delivered. It had all the terrifying presence that made Jin-Roh so great. It’s never going to make anyone’s top 10 list of greatest shootouts in cinema history, but I still loved it. Or maybe I was so deprived of action that I would have been happy with anything. But no matter how awesome that last twenty minutes or so is, it’s too little, far, far too late.

I really wanted this film to be great, but it’s boring, tiresome, and doesn’t even answer its own questions. I can only hope Red Spectacles delivers more. More of anything. I know Koichi is the main character of that movie, so maybe I’ll get some answers there. But even if I’m just missing some pertinent details, it still doesn’t change the fact that nothing happens in Stray Dog. Every time I think about that opening scene with all the police officers, exhausted and beaten, I imagine just how awesome this film could have, should have, been, and it makes me depressed.