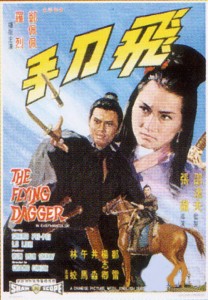 From the opening you might expect a strong female swordswoman film, like many of these early Shaw Brothers pictures are. In The Flying Dagger this is merely the setup and Cheng Pei Pei pretty much takes a backseat throughout the rest of the film, becoming more of a romantic interest than anything else. The Flying Dagger is a total anti-hero film, with Lo Lieh leaning towards the heroic, but he’s not above helping out the other side if it suits him in the moment. His character is electric on-screen, and he proves yet again why he’s one of my favorites in the Shaw Brothers stable of actors.

When the film transitions to color after the intro, the first shot is a tight close-up on the torso of a white-robed figure. A sword is quickly withdrawn from his stomach and bright red blood stains his clothes. If there was any doubt that this was a Chang Cheh movie, it was just dispelled. But even this moment (and the following scene) is something of a misnomer for the film that follows. With the anti-hero character leading the charge through the rest of the film, this scene is the only one with white-garbed heroic types valiantly fighting for their ideals. It’s almost as if Chang knew the rest of the film wouldn’t gel with these types of heroes, but he still found a way to shoehorn them in where he could.

As I previously mentioned, Lo Lieh is fantastic as the anti-hero Yang Qing, but every good hero is nothing without a clever and cunning villain to go up against. That’s where Yeung Chi Hung comes in as Flying Dagger Jiao Lei. Yueng is amazing in his villainy: cackling wildly and throwing daggers with absolute precision into his foe’s limbs or torso as he sees fit. Cheng Pei Pei does a great job with everything she’s given, but her fans might be disappointed with her role overall. She barely gets a chance to break into action, as she’s pretty shackled to the tortured woman in love stereotype. This leads to a lot of overly melodramatic moments between her and Lo Lieh, but even these aren’t as bad as you might expect. Chang Cheh’s camera captures the moments well, specifically in a tight close-up that manages to contain their feelings for each other as well as their inability to truly be together.

One of my favorite moments of violence comes when Lo Lieh is down on his luck, beaten and suffering. A couple of bandits stand guard over him, and when one comes to check if Lo has died, Lo springs on him and knocks him to the ground. He takes his sword and brutally thrusts it into him repeatedly. The other bandit runs up from behind, and Lo bends backwards, driving the sword clean through the bandit’s torso. I watched it about four times it was so good.

The Flying Dagger is definitely a minor Chang Cheh work, but it’s a hell of a lot of fun. Lo Lieh is fantastic as the mysterious anti-hero and truly carries the movie on his shoulders. The third act is bogged down a bit when the romantic sub-plot takes precedence over the main drive of the film, but this doesn’t last too long. Before you know it we’re at the rousing finale, complete with a killer bit of writing that ties up a clever little sub-plot I really should have seen coming. I love it when that kind of thing happens and I’m sure the ridiculous amount of fun I had while watching the film had something to do with it.

Next up in this chronological series of the Shaw Brother’s martial arts films, it’s Chang Cheh’s The Invincible Fist!