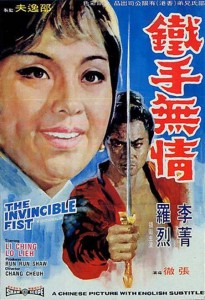 The fight choreography is really starting to take shape, thanks to the inspired work of Tang Chia and Lau Kar-Leung. At this point they both have a number of great films under their belts, and The Invincible Fist is yet another film filled with inventive on-screen martial displays of power. Each of the bandits carries a unique weapon that delivers on the promises it makes to the audience. For instance, one villain that lives disguised as a merchant uses an abacus as his weapon, shooting out the beads with a swipe of his fan and embedding them in the bodies of his enemies. How can a fan of Asian cinema not get a kick out of that? But it doesn’t stop there; when all the beads are used, the abacus becomes a fucking three-sectioned staff! There’s also a great moment when one villain bursts open a watermelon in front of Lo Lieh and the seeds fly out like bullets towards him. It’s fun, creative moments like this that always set Hong Kong films apart for me, and I loved every minute of it.

Besides the wonderful weapons on display, the fights feature some of Chang Cheh’s best camerawork to date as well as exceptional editing. There is a restrained tension in many moments of the film which easily could have gone over-the-top, all created through the perfect editing. That’s what really distinguishes The Invincible Fist as a Chang Cheh movie: it manages to be somewhat subtle and restrained amidst the wild, reckless fight scenes with fantastic weapons and colorful characters. The film’s well-written script removes most of the clichéd heroics and martial chivalry from the wuxia genre and tones down the full-bore action tendencies of Chang Cheh just enough to make for a ridiculously fun, believable film. Don’t get me wrong, I LOVE Chang Cheh in all his over-the-top, blood-soaked glory, but there’s something to be said for the clever combination of restraint and reckless energy that manages to impress me on every level.

Ni Kuang’s script is a big reason this film succeeds as well as it does. He was a noted writer of novels before coming to work at Shaw Brother’s Studios where he contributed his skills to over 200 films. His first film at the company was The One-Armed Swordsman, which he co-wrote with Chang Cheh, and it only takes a quick glance through his filmography to see that Ni is easily one of the most influential martial arts scribes of all time. He’s probably just as important a figure as Chang Cheh, but in the less noticeable position of screenwriter (I mean, who would look to martial arts film for quality writing?), he doesn’t get the credit he deserves. One of the greatest strokes of brilliance contained here is the injection of Li Ching’s character late in the film. For spoiler reasons I won’t go into details about who she is, or how she figures in, but she brings a humanizing, soft side to the film that propels it forward into a climax steeped in drama, dread and tension.

I can’t recommend this film enough. It’s a Chang Cheh film that you’ve probably never heard of but it deserves its place as one of his early masterpieces. The Invincible Fist perfectly marries the decadent fun of Return of the One-Armed Swordsman, and the well-written, dramatic style of earlier works such as The Assassin, into a film that entertains from start to finish. A true gem.

Oh shit! I actually found a legitimate, old-school trailer for this one! Enjoy.

Again, I’m unsure that I’ll be able to get any reviews together for next week, but if I do…

Next up in this chronological series of the Shaw Brother’s martial arts films, it’s another of Chang Cheh’s forays outside of the wuxia realm (and the first to feature the fearsome duo of Ti Lung and David Chiang), Dead End!