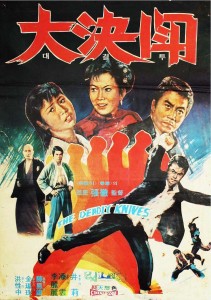 On top of this, when they return to their hometown, Yan Zi Fei and Guan Yue Hua find that the orphan taken in by the Yan family, Jiao Jiao (Lily Li Li-Li), is in love with Yan Zi Fei. But before you say “Love Triangle,” there’s also Xu Qian (Chen Feng-Chen), another orphan raised by the Yan family, who has been secretly in love with Jiao Jiao for a long time as well. So what’s that? A love square? You’d think with all this lovin’ goin’ around that The Deadly Knives would be more concerned with romance and resolving all the misunderstandings these secret crushes cause. The film instead chooses to use these crushes as motivation to push the characters forward into bad decisions, pulling the plot along with it. But like most Chinese vs. Japanese movies, it all boils down to the Japanese people being ruthless assholes influencing everyone.

But after the film ended, I had a thought. It’s also possible that the rapes are in the film for another reason. The Deadly Knives opens with a shot of a falling tree, the sounds of saws cutting it down to be shipped away via train. It is a beautiful natural resource controlled and used as the man in charge sees fit. The rape scenes that come during the film are of a similar nature, with the men who are seeking power via the forest trying to overcome and control a beautiful girl. Then the film ends with our hero’s revenge fulfilled (sorry about the spoilers for nearly every martial arts film!), but no matter what he did, he was unable to save the ravaged girl’s spirit.

Director Chang Il-Ho then closes the film by repeating the footage of the tree falling in the forest (this time showing multiple trees falling instead of just one), and then being bundled and sawed for transport. Coupled with the Chinese vs. Japanese struggle, it’s not too far out of the realm of possibility to see The Deadly Knives as a film with a message. Something like, “Our land is being raped by foreigners, and while we should fight against it where we can, it is inevitable.” On the surface, the film seems to be a standard revenge flick, but the more I think about it, the more I believe it to be a patriotic message, albeit one with a sadness and a depressing quality that doesn’t exactly rouse one’s spirit.

The action in the film is mostly chaotic brawls between tons of people and these were largely boring to me, even though the choreography was handled by none other than Yuen Woo-Ping and Yuen Cheung-Yan. The Yuens do inject some great moments here and there, most notably during the film’s first fight in a passenger train’s aisle, and later during a great tracking shot when Ling Yun gets ahold of a samurai sword about midway through the movie. With a better script and situations to work with, I’m sure the Yuens could have delivered excellent fights like they did in The Killer, but this is not that movie.

The Deadly Knives does a good job of providing melodrama and fight scenes, but neither of them are successful enough to make for a great film. The story is perhaps the weakest link, giving us a rather uninteresting lead character in a clichéd situation. Die-hard fans of the Shaw films will find things to enjoy, but all others would be better served watching a better film. Fans of Jackie Chan’s films with Yuen Woo-Ping will also enjoy seeing a young Dean Shek Tin in a comedic role here.

Next up in this chronological jaunt through the Shaw Brothers Martial Arts catalog is the Chang Cheh non-martial arts film, Young People, featuring David Chiang, Ti Lung and Chen Kuan-Tai! See ya then!