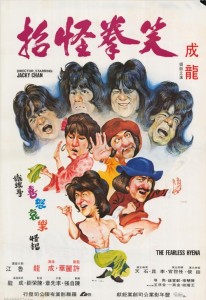 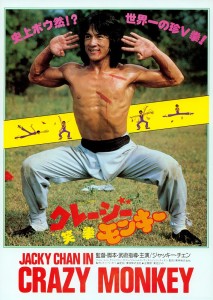 Some of the fights are merely variations on other fights throughout the previous Jackie Chan films, recalling things like the final battle of Drunken Master, and the restaurant fight and the multi-staff extravaganza of Snake and Crane Arts of Shaolin. This isn’t so much of an issue because the variations are enough that it doesn’t feel like you’re watching a simple re-hash; there was clearly a lot of thought put into the fights of this film. But it’s the fights where Jackie really flexes his comedic muscles, treading new ground completely, that propel The Fearless Hyena from merely a good film to a great one. I’m not sure that everyone would call Chan’s battles masquerading as a cross-eyed simpleton or a woman are truly great, but I found the thick mixture of hilarity and hard-hitting strikes to be incredibly entertaining. The cross-eyed character reminded me a lot of Cantinflas as Passepartout in Around the World in 80 Days, which is funny as Jackie later played the character in that film’s remake. Anyway, the fight where Jackie wields a staff against an attacker using a sword is an especially good one, too. And who can forget the battle waged with chopsticks? The choreography is this movie is just superb.

It should also be noted that while The Fearless Hyena is Jackie Chan’s first crack at directing, the film comes off as a seasoned work that can easily stand beside similar films of the era. Chan had been around the industry for a while, and had clearly picked up a thing or two about how to film a scene! He uses slow motion exceptionally well, enhancing moments of extreme emotion, and slowing down short sections of the final fight for maximum impact. The Fearless Hyena definitely doesn’t feel as thematically sound as a Chang Cheh film, for instance, but Jackie definitely has a good handle on what he wanted out of the film and was able to capture it.

The Fearless Hyena won’t stun and amaze in the same way that Snake in the Eagle’s Shadow or Drunken Master do, but it’s easily the best film Jackie made under the Lo Wei banner. The choreography is tight, impressive and funny, the training sequences are exciting and excruciatingly tortuous, and Jackie’s acting is perhaps even more confident and self-assured than in Drunken Master. Jackie even created his own kung fu style for the film, “Emotional Kung Fu” AKA the Hyena style that incorporates kung fu interpretations of emotions such as laughing, crying, sadness and anger. If you love Jackie Chan and old school kung fu movies, this one’s a no-brainer.

Next up in this chronological journey through the films of Jackie Chan is the last of Jackie’s Lo Wei-directed films (but not the last of the ones that Lo produced), 1979’s Dragon Fist!