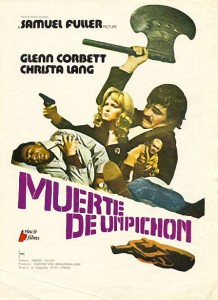 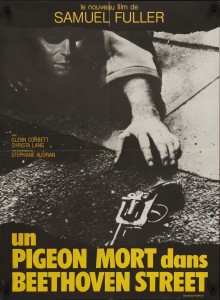 Fuller’s intent with Dead Pigeon on Beethoven Street was to make a self-aware comedy that doesn’t bother with the typical tropes of the detective genre. I think he almost succeeded at that goal, it’s just that the film is played so straightly most of the time that it can be hard to remember that it’s supposed to be funny. Originally, there was to be an opening credit sequence with the cast and crew dressed in carnival outfits, informing us immediately of the film’s tone, but that was left on the cutting room floor. Instead, the opening credits play out over a stern bust of Beethoven watching over his namesake street. Fuller’s intended version of the film that carries the original credits sequence played a few arthouses during its limited US release and runs 128 minutes (38 minutes longer than the broadcast version I saw). You can read more about that version here.

But some of comedic moments are hard to miss regardless of the film’s varied tone, because when Fuller goes for it, he really goes for it. This is a Sam Fuller movie, after all! For instance, there’s a completely bonkers sword fight in a room adorned with weapons on the walls. Absolutely hilarious and over the top, a battle rages between a cultured sword fighter and Sandy the American, who is so consumed with rage that he flails his weapon wildly and throws it at the other man without any thought. Then he grabs another sword from the wall and gives that one a few good swings before throwing it too. The cycle repeats through an entire arsenal of bladed weapons. Like I said: it’s BONKERS (in the best possible way). 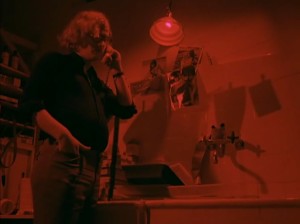 Dead Pigeon on Beethoven Street is quite the vibrant film, too. The cinematography, editing and camera placement are especially inspired, bringing the darkly comedic underworld of political blackmail to life. Many of the film’s settings are equally impressive, ranging from a tense escape through a hospital (complete with a guy in a wheelchair being pushed down a flight of stairs and a shootout in a maternity ward) to a street carnival where one of our main heavies is dressed as a clown. Being cooped up writing for so long without making a movie was apparently good for Fuller’s creativity, as Dead Pigeon on Beethoven Street showcases many outstanding shots that skillfully tell a visual story.

These intensely visual moments are scored by the music of the influential German band Can (billed here as “The Can”), and their pulsating, jangly music is the perfect match for the tone and imagery of the film. As many later Fuller films do, Dead Pigeon on Beethoven Street feels somewhat dreamlike at times, and Can’s music also evokes something of a similar state of mind. That’s not to say that the music is ethereal or anything, but that if one were to dream of being chased, Can’s music here would be a perfect aural complement. In its more abstract moments, the music also reminded me a lot of Goblin’s soundtrack work, specifically moments in the score for Suspiria. 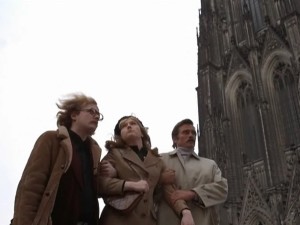 But as much as I enjoyed the film, there’s only so many times you can see people getting drugged and having compromising photos taken, and that’s what makes up nearly the entire midsection of the film. There are variations, of course, and it’s all well-shot, but the setup and slam dunk of the same basic scene over and over gets old rather fast (even if each scene on its own is fun). This cripples the film from being great, as it feels like Fuller is trying to kill time while his narrative takes a quick vacation. I doubt that’s the case, though, as it’s probably more the fault of the missing 38 minutes than anything else.

But even taking the narrative slack of the broadcast version into consideration, Dead Pigeon on Beethoven Street is a great piece of evidence that the tampering done to Shark! was a travesty. Fuller was clearly still an inventive, powerhouse filmmaker that most likely delivered a very good film to those shyster producers… but I digress. Dead Pigeon on Beethoven Street isn’t a great Fuller film, but it is very entertaining and chock full of great moments. Glenn Corbett does an excellent job as the inept detective (who seems to have no clue of his ineptitude), playing up both the stupidity and the anger of the character beautifully. This film was supposed to get a stateside DVD release by Fantoma a number of years ago, but it seems that Olive Films now owns the distribution rights. Seeing as they’ve released two Fuller films to DVD/Blu-ray quite recently, let’s hope their edition of Dead Pigeon on Beethoven Street isn’t too far away (and that it includes both versions of the film).

Couldn’t find a trailer, but here’s the sword fight.