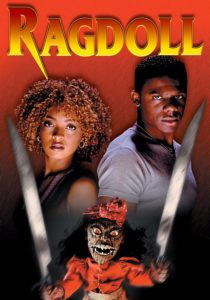 Expectations: I don’t expect much, but I hope it’s fun.

Ragdoll is a pretty fun, voodoo/black magic themed horror movie, but I wouldn’t hold it against you if you didn’t make it past the first couple of minutes. The film’s lead character is Kwame (Russell Richardson), but Ragdoll starts with a flashback intro, showing us a moment in the childhood of Kwame’s grandma. Her mother — Kwame’s great grandmother — was a practitioner of the black arts, and apparently she made a bad deal with the Shadow Man. Due to this, Kwame’s grandmother witnessed her mother’s murder by an agent of the Shadow Man, in this case, a haunted dress. It’s as scary and convincing as it sounds; it looks like someone is just off-screen with a fishing pole waving the dress around.

I thought this traumatic moment might cause Kwame’s grandmother to live a life free of the dark arts, but no! When we flash-forward to the present day, we learn that dear ol’ Gran is indeed a dabbler in the occult, she just does so with a supreme respect and knowledge of what might happen if she isn’t careful with how she conducts her dealings with the other side. Kwame, though, has had no such trauma in his life, so when his up-and-coming rap group (called KT Bounce) is forced into a managerial contract with a ruthless gangster, Big Pere (William Stanford Davis), he seeks the help of the Shadow Man to fight his battles. 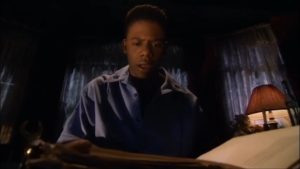 You can’t deny that it’s a pretty standard story, but the execution is handled well… for the most part. Ted Nicolaou is one of Full Moon’s most tried and true directors, and he fills Ragdoll with a lot of nice camerawork that succeeds in delivering tension and suspense to this low-budget affair. He also manages to get some nice performances from the cast, something the majority of B-Movies don’t even attempt. But amidst the good performances, there’s a line here and there delivered in a horribly wooden manner. It’s funny in the way that acting in B-Movies is funny, but it stings more here because these moments are sandwiched between genuinely good stuff.

It always seems like Charles Band skimps on the FX budget, and Ragdoll is no different. But thankfully, the FX work is much like the acting: mostly good with a few bad spots. The Ragdoll puppet used for close-ups has good articulation and is a well-designed character. It starts its life as a simple ragdoll, but after the Shadow Man pours his killing magic into it, the face looks evil and devious. Perhaps I’m just easily amused, but I really liked its look. The FX guys also managed to make the Ragdoll convincingly run away from the camera, and, in one of my favorite moments of the film, scratch a record. 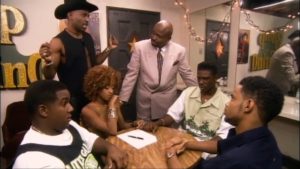 But what dooms Ragdoll from living up to its potential is that even though it’s pretty short (70-some minutes),  there’s a fair amount of needless filler. I don’t know about everyone else, but I definitely didn’t need to see KT Bounce lip-synch their way through multiple performances, not to mention another song by a different group. If only Charles Band had put a little extra money towards this one instead of producing another movie, Ragdoll might have found a bigger audience. I mean, Full Moon made 19 movies in 1999! And one of them was the stupendously shitty Teenage Space Vampires! C’mon now. Charles Band’s method has always been quantity over quality, though, so I really should have learned my lesson by now.

Ragdoll was Charles Band’s attempt at appealing to a black audience, but since there wasn’t a sequel I’m going to guess it didn’t do that well. It’s a shame, too, because it’s a pretty fun movie. I know I’d be down for another one!

I’ll leave you with my favorite line: “You tryin’ to show your balls? OK, I see the big motherfuckin’ things! Now tuck ’em back in, why don’t you!”

Next time I get around to a Full Moon movie I’ll be watching the final Empire production left to review (barring unreleased stuff eventually coming out): David DeCoteau’s Dr. Alien! See ya then!