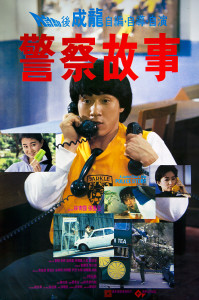 Anyway, Police Story opens in the shantytown and before too long the tension bursts into a big action scene that culminates with a bunch of cars driving through the ramshackle buildings to avoid the police blockades on the roads. I found this stunt — which is truly amazing to watch — to be like a metaphor for the entire methodology of the Hong Kong industry. When faced with a situation where sane people would stop and say, “Well, that’s it. We can’t do it,” Hong Kong finds a way to do it, no matter what! Even better examples of this might be the stunts where Jackie is in high personal danger, like his clock tower jump in Project A or the light pole slide in this film. Jackie would stop at nothing to create a bigger and better film. It’s this kind of authenticity and commitment that makes Jackie’s work so visceral and exciting. He could have literally died for his art, and he would have done so willingly.

These stunts make Police Story an incredible film to take in, the only issue is that these moments of supreme, undeniable action brilliance make up maybe 20-30 minutes of a 100-minute film. The rest of the movie just isn’t up to the same level of quality. Don’t get me wrong, Jackie delivers more than you could ask for in Police Story, but I think without some context and thought about how dangerous and unique this type of filmmaking is/was, these accomplishments will seem diluted because the dialogue sections don’t hold their weight. I guess this is all just a long-winded way of saying that it’s easy to become jaded and miss why Police Story is such an achievement for Jackie.

Watching the film knowing that it would spawn sequels also lends itself to a different type of viewing. The term “Supercop” stuck in my mind throughout, and I found Jackie’s incredible actions in the opening to be very representative of this. The tone is serious during this section, but his actions are superhuman and extraordinary (and because he’s doing the stunts it really embellishes the idea that he’s a Supercop). He’s using umbrellas to get onto a bus, he’s running down the side of a mountain to cut the criminals off at the pass, etc. etc. We are shown that a Supercop will get the job done at any cost, but also that just being a Supercop is not enough. You have to win in court, too, and lawyers are tricky. Although, Jackie ultimately wins by convincing his superiors that his reckless methods are correct, using his “anything to get the job done” Supercop skills to save the day, so I can’t say that the character completed any type of constructive arc (other than to fully realize himself as a Supercop action character, which is totally worthwhile in movieland).

Much of the middle section is devoted to Jackie’s relationships with the star witness Salina (Brigitte Lin) and his girlfriend May (Maggie Cheung). As action fans, we know and respect Jackie’s character for his ability to do whatever it takes to catch the criminal, but Police Story also shows Jackie manipulating and lying to Salina and May to get his way. This is much harder to embrace, but it deepens the character and shows that his power has corrupted him somewhat. It must be hard to be Supercop on the streets and then go home to be a normal human, right? It is a struggle, and one Jackie has yet to conquer. He attempts to use his Supercop mentality, but it backfires on him and he gets multiple cakes to the face. I don’t know that Jackie learned his lesson, but if nothing else I was happy to see that the women of Police Story were able to see through and circumvent his unbridled machismo.

But what we’re really here for is the action, and the constructed realism of the film’s fights are among the genre’s best offerings. It’s all top-notch work, specifically the focus on breaking just about every pane of glass in Hong Kong. OK, I’m exaggerating some, but there is a shitload of glass breaking in this film! According to Jackie’s autobiography, the whole idea for the film stemmed from breaking glass, and the crew even nicknamed the movie Glass Story because of it! Anyway, there’s just something exciting and “real” about seeing people thrown through a glass window, or Jackie’s head bashing through one, or a motorcycle driving through a series of glass displays, etc. As audience members we are all aware of the dangers of breaking glass, so we wince with each crash. It’s this type of visceral, human connection that’s missing from modern action films.

Police Story is a great film that succeeds in spite of whatever faults it might have at a script level. The incredible danger and accomplishment represented in the action is undeniable, and even 30 years later it still excites. I worry that without some context newcomers might think it doesn’t live up to the hype, but regardless Police Story stands tall as one of Jackie’s (and Hong Kong’s) best action films. He had been honing his style through many films, but Police Story feels like the first film in Jackie’s filmography to fully encapsulate everything he was trying to do at the time. It’s not a traditional martial arts action film (there’s no “final fight” with one ultra-baddie, for instance), but it instead represents a new direction for the genre and Jackie Chan. It’s also his first film to feature frequent co-stars Bill Tung and Maggie Cheung! Highly recommended.

Next up in this chronological journey through the films of Jackie Chan is Armour of God! Oh, hell yeah! See ya then!