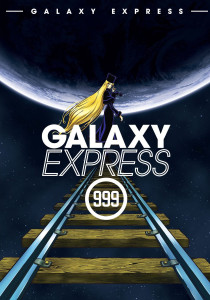 It’s also the product of Leiji Matsumoto, one of the biggest names in Japanese sci-fi, perhaps equivalent to Ray Bradbury in America. His most high-profile work in the west was the Yamato series, which went by the name Star Blazers in the US. You’d have to be pretty old to remember that series, but there are still productions based on Matsumoto’s works being made today. 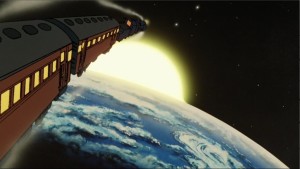 Watching Galaxy Express made me realize just why Matsumoto has such a huge following in Japan, and it’s not just the steam locomotives flying through space. Objects that look out of time make up a lot of the visual style here, like robots riding on horseback, the always fun laser rapier, or the equally entertaining rocket-powered bicycle.  But beyond those oddities is a really good story as well.

It starts off with a boy named Tetsuro who’s out for revenge. The evil cyborg Count Mecha killed his mother and then mounted her nude body over his fireplace mantle. I’d be out for revenge, too. So Tetsuro tries to steal a ticket for the Galaxy Express 999 (that 999 is pronounced “three nine,” by the way). Apparently, the train will take him to a planet that gives out robot bodies for free, and he’ll need one to take on Count Mecha. As his journey goes on, Tetsuro meets other people, both human and robot, that make him question whether becoming a robot himself is such a good idea. Sure, the immortality is nice and all, but the loss of humanity leaves him with some doubts. It’s this theme about the cost of immortality that drives the plot more so than the revenge tale. 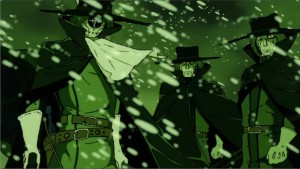 Along the way, Tetsuro bumps into a lot of characters from Matsumoto’s universe. The most important of them is an enigmatic woman named Maetel who looks shockingly similar to Tetsuro’s mother. She remains with him throughout the film, and is just as important to the story as Tetsuro is. The legendary space pirates Captain Harlock and Queen Emeraldas also make appearances, and this is where things don’t quite add up for me.

It feels like a bunch of celebrity guest appearances, except we don’t know who they are. It’s not that we need to know anything about them beyond the fact that they are badass space pirates, feared by the government but loved by the poor (a bit like Robin Hood, I suppose). It’s that all of these characters know each other, and the film expects you to know them, too. It feels like we don’t have the whole story here, and unless you watched the Captain Harlock TV series, you really don’t. 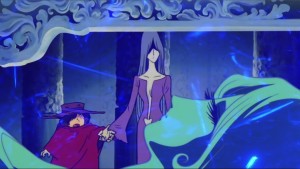 Despite this bit of disconnect, it’s clear that Harlock and his companions are part of an entirely separate story, and that the tale of Tetsuro and Maetel in this film is complete. The real problem is that the first film adaptation of Leiji Matsumoto (outside of the Yamato series at least) is based upon a story that takes place later than all of his other stories. It would have been nice to start with a Captain Harlock film instead, but the film works well enough on its own, so there’s no reason to condemn it for not having a prequel.

In fact, it’s one of the most coherent adaptations of a longer series that I’ve seen. I never felt like pertinent information was left out or glossed over. Character relationships develop a bit too quickly, but that’s a small price to pay for a clear and succinct retelling of a TV series over 100 episodes long, a series that was not even finished when the film released. It took another two years for the TV series to finish its version of the story. 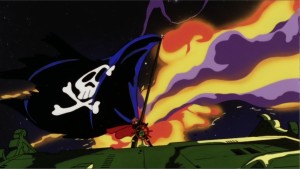 I can see how the concept would be fantastic for a TV series. Every episode Tetsuro could stretch his legs at the next layover, have a quick adventure on some strange planet, then hop back aboard the 999 in time for the end credits to roll, a little bit wiser for his troubles. You would expect such a structure to feel episodic in film, and while there is some truth to that, it’s never a problem. The film’s pacing works well at keeping things moving along, and the events lead into each other quite smoothly considering its premise.

Galaxy Express is, as near as I can determine, the first film directed by Rintaro, who also directed a large number of other Leiji Matsumoto adaptations. I didn’t get that trippy feel to the action sequences that usually accompanies Rintaro films, but this might be one of his best anyway simply for the completeness of the story. This is the first time I’ve watched one of his films and felt the story was complete.

It’s a well-made film overall. The animation is pretty low quality, but that’s nothing abnormal for the time it was made (and may be why the action scenes don’t carry that unique Rintaro feel). More importantly, the story is compelling, the style is cool, and the characters are great. You might want to watch a Harlock film first to establish the setting, but this is still a solid piece of work well worth the time.

Next week I’ll bring you more flying locomotives and girls with absurdly long eyelashes in the sequel, Adieu Galaxy Express 999.