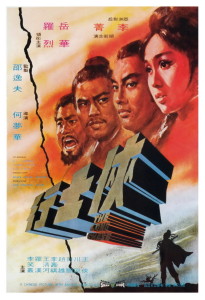 So after the assassin crawls around and does the deed, a thrilling battle ensues and even though he puts up a good fight, Lo Lieh just can’t catch the wily assassin. His boss nearly beheads him, but instead he gives him five days to bring in the assassin (AKA The King of Flying Daggers) alive. And with that the chase is on! Except it’s not really a chase per se, it’s more of a cat-and-mouse game of obscured identity and the bonds of brotherhood. But as I mentioned in the intro, these brotherly bonds play out considerably differently than a Chang Cheh film would explore them, and that itself makes The Long Chase worthwhile for classic martial arts fans who enjoy the theme.

But as a good majority of martial arts fans aren’t necessarily focused or interested in the thematic content of their films, I’m also happy to report that the action is pretty damn good in The Long Chase. The fights are plentiful, exciting and unique, and they contain a lot of little fantasy flourishes that Ho Meng-Hua is so good at incorporating into his action. But I wouldn’t call this a wuxia film exactly. Instead, it’s like a few of the other 1971 films where it feels somewhere in-between true wuxia and the later hand-to-hand kung fu films. The characters are still capable of some supernatural feats, but the story is simpler and more down to Earth. Seeing this gradual change in a few films makes me even more excited to crack into 1972 and see where that takes the genre.

The film isn’t perfect, though, and its biggest issues are the weak romance between Yueh Hua and Li Ching and some wildly sped-up sections in the fight scenes. Neither is enough to derail the film, but Li Ching feels like an especially undeveloped character, especially in a Ho Meng-Hua film where females had traditionally been main characters. I guess that’s more the changing film industry at the time than anything else, but I still would have liked Li Ching to have had more to do than tell a few lies and look longingly at Yueh Hua. The sped-up fight scenes are more common to a lot of these films, but I found the occurrences here to be especially distracting because the actual choreography was well-done and the extra speed felt needless. Oh, and the “Eight Freaks of Jiangnan” really, really didn’t live up to the promise that their name elicits.

These are minor concerns ultimately, especially in a film as rollicking, quick-moving and fun as The Long Chase. A tense, cat-and-mouse struggle between Yueh Hua and Lo Lieh? Well-done cinematography… better than your average Shaw film? Bandits with explosives? Thrilling rescues atop wooden towers? Spinning bowls on fingers? The Long Chase has all of these entertaining things and many more, all packed into a swift 82 minutes. After directing numerous films throughout the first few years of this Shaw Brothers series, Ho Meng-Hua finally delivered a film that I flat-out loved.

No trailer, but here’s a clip from the opening.

Next up in this chronological jaunt through the Shaw Brothers Martial Arts catalog is the last film of 1971, a film for which no exact release date is known (so I’m doing it at the end of the year), Kuo Nan Hung’s The Mighty One! See ya next week!