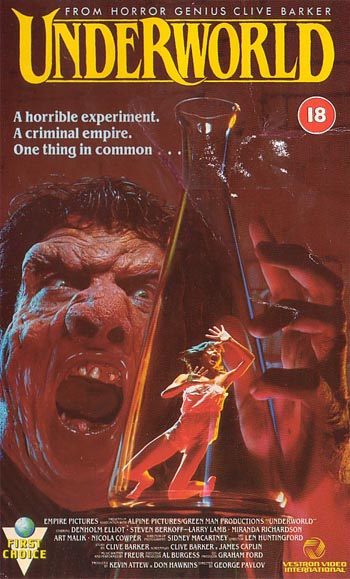 Enter Roy Bain, who knows the girl in question and can’t stand to know that she’s in harm’s way. Bain’s old boss, Motherskille, hires him back to find the girl. From here on, Bain slowly tracks down the girl and small bits of plot reveal themselves. It’s painful to watch because it unfolds slower than a snail trying to make it across the Golden Gate bridge. After about three hours, we find out that Dr. Savary (Denholm Elliott) has created a drug called “White Man” that he’s been experimenting with on heroin addicts and the like. It works great, man…except for the hideous facial mutations it causes on everyone that takes it. Everyone except for Nicole, the girl stolen in the opening scene. It all might seem fun and coherent, but it’s all told so poorly that you won’t even notice. 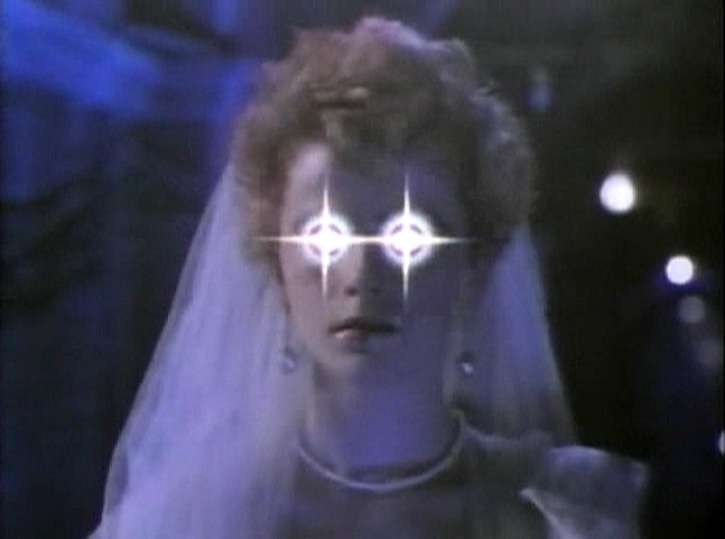 Gore fans will need to get their fix elsewhere as there’s only one scene at the end that features anything to speak of. It’s pretty fun and I immediately exclaimed that it was worth the boredom just to see it, but realistically given some distance from it, it’s not worth it. Especially because this is a rare movie so you would have to hunt it down, only to see a four-second, moderately-amusing shot of Denholm Elliot’s face melting and then bursting into flames after Nicole’s eyes flash red and then starry in his general direction. It is by far the highlight of the film, but it’s a definite case of too little too late. The perfect sort of thing to Youtube, but unfortunately it seems to be too rare to even be on Youtube. I’ll do my best and provide pictures.

It’s a shame the movie turned out so boring and awful, as the first forty minutes or so aren’t that bad. They aren’t very good either, but at least the viewer is trying to piece together what’s going on and who everyone is. There’s also tons of killer 80s music in the opening half that helped to keep me interested even if the scene itself was boring. It seemed like the music was far less prominent in the second half, but perhaps this was just me fading in and out of boredom and not paying attention. I did try to pay attention to the acting, which was bad across the board. The lone exception was Denholm Elliott who does his best to elevate the production with a solid turn as a mad doctor. 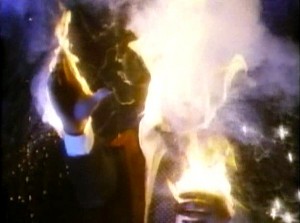 Underworld is more of a mystery thriller than a true horror movie, but it doesn’t matter what genre you’re into, the film is a bore. The fun premise is wasted through poor execution and I can’t help but wonder how much of Clive Barker’s original script made it to the screen. He’s known for not holding back the gore and the sexual overtones, and both were on the back burner for this one. I remember reading somewhere that it was because of his disappointment with how this film and Rawhead Rex turned out, that he decided to direct Hellraiser himself. While Hellraiser is no cinematic masterpiece, it is one hell of a horror film, and it spawned tons of nightmares and some nightmarish sequels. If nothing else, it proved that Clive can deliver the horrific goods when allowed to. Underworld is about a million times worse then Hellraiser and is the type of film that only hardcore horror or Clive completists need to worry about seeing. All others, you’ve been warned!

Come back on Friday for another rare Clive Barker film review, Rawhead Rex! It’s also directed by George Pavlou, so hopefully it’s better than this one, but I won’t hold my breath!