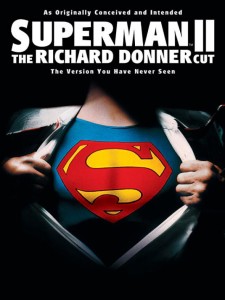 To be fair, though, some of what they do in The Richard Donner Cut could not have existed even if Richard Donner had been able to finish Superman II after the success of the original film. When tasked with finishing Superman for release, prior to completing filming on Superman II, Donner decided not to go with the original cliffhanger ending. He instead decided to cannibalize the written ending to Superman II, the “turn back time” ending. So if Donner had actually completed this in 1980, the opening and the ending would have needed to be somewhat different. So The Richard Donner Cut is actually working on two layers of fantasy: the fantasy of Richard Donner finishing Superman II, and doing so within a world where he was also not forced to finish Superman before filming on the two-film story was complete.

Other than those added sections, my two main concerns with the theatrical version were how conveniently Superman gets his powers back and how the romance and relationship between Lois Lane and Superman/Clark Kent felt forced and flat. I was happy to see that both were resolved rather well here, thanks to a lot of structurally different scenes that bring the film back to the tone seen in Superman. Now the loss and regaining of Superman’s powers has weight and doesn’t feel like a contrived plot point to keep the story moving. No longer does Superman simply find the green crystal and POW! he’s Superman again; the scene is now the culminating moment of the Superman/Jor-El relationship and it’s one of the best moments in the film.

The Lois Lane relationship is the biggest improvement, though. These scenes are basically the crux of Superman II, as one of the sequel’s main storylines is wholly focused on this relationship. So when just about all of these incredible scenes that build the relationship naturally are excised from the theatrical Superman II, and replaced with poorly re-written versions, it’s no wonder why Superman II is an underwhelming film in comparison. Seeing the original scenes as intended makes Superman II‘s story click into place, working off of the first film’s groundwork beautifully. Again, it’s amazing just how much a few scenes and some careful editing can do to a movie.

The Richard Donner Cut is an essential piece to the Superman legacy, and I really have to give it up to everyone involved for bringing this together. Superman fans should rejoice at its release (and they probably already have, seeing as it came out seven years ago!). If you hesitate to watch this version because you think that it can’t possibly be that much better than the lackluster Superman II: it really is… by a lot. I still think certain aspects of the story are kinda wonky, but overall Superman II: The Richard Donner Cut is a phenomenal reconstruction of a never-finished near-classic. It’s like a whole different movie in a lot of ways, so definitely check it out Superman fans!

Imagine that, no legitimate trailer! Well… here’s the “Making Of” featurette I mentioned in the review!